Footage of Korea’s nine-foot tall players scoring goal after goal past a weeping and unusually Oriental-looking Brazilian side was beamed across the country to over 35 million people, 11 million more than its actual population.

The first three goals saw their goalkeeper earn the 47th hat-trick of his career, with the last being a remarkable bicycle kick from the halfway line.

Each goal was celebrated by the players running to the corner flag and delivering an impassioned five-minute lecture on the nation’s rising factory productivity to a rapt crowd of 52,000 Korean fans.

Tom Logan, World Cup analyst at Madeley-Finnegan, said: “North Korea’s footage differs significantly from the rest of the world, inasmuch as Ellis Park appeared to be a dilapidated velodrome on an industrial estate and Korea’s fourth and seventh goal was exactly the same footage.”

But Supreme Leader Kim Jong-Il said: “Our glorious players showed what discipline, moral fortitude and being repeatedly beaten can achieve. I personally coached the team myself, shortly after writing my 375th novel Super Kim Slays Moth-Ra & Has Sexy Fun With Madonna, and fighting a bear with a claw hammer.”

A North Korean government spokesman added: “Some may think they remember a goalkeeper called Ri Myong-Guk. They are mistaken. If anybody meets somebody claiming to be a member of his family, they are actually Western demons and should be shot on sight.”

North Korean fan Jong-Se Park said: “Much appreciation and fraternal joy to the mighty footballers of our land! I do so hope my family can please be released unharmed so they can witness the ultimate triumph in the final!” 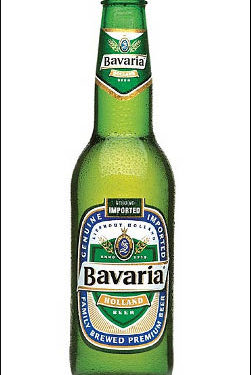 FIFA was banned from its own World Cup last night after giving millions of pounds worth of publicity to an unofficial product. But Fifa revealed the women were part of a secret marketing campaign by Bavaria, the Dutch brewery that produces a premium pils lager with a fresh, clean flavour made with only the finest barley, home grown yeast and water from its own natural spring.

A Fifa spokesman said: “This was a blatant attempt to promote their unofficial range of products including Bavaria 8.6, a beer that is strong in both alcohol and flavour with distinct notes of dried fruit and liqourice.

“And if you’re driving don’t forget how dishonest they were in drawing your attention to their alcohol free beer which refuses to compromise on taste.”

Bill McKay, a television viewer from Peterborough, said: “I did notice them fleetingly during the Holland-Denmark game but the only thought that crossed my mind was maybe one day having sex with one of them and her asking half way through if it was okay if five or six of her friends joined in and eventually we all go and live on a beach in the South Pacific until I die of intercourse.

“I had no idea they had a secret plan to make me drink this delicious beverage which I had never heard of but which is, not surprisingly, sold in more than 100 countries around the globe.”

The Dutch women are believed to have acquired match tickets from some guy who got them from a man who sat next to a bloke in a pub who was in the queue at Heathrow behind Robbie Earle’s cousin’s friend’s chiropractor’s mechanic.

The ITV pundit was immediately sacked though his lawyers stressed his contract stipulated he would provide analysis of the Fifa World Cup and as Fifa was now banned from the tournament he should be reinstated without delay and handed a fresh batch of tickets that may or may not find its way into the hands of a bevy of giggly, big-titted Dutch women full of lovely beer.