'Oi, Manuel! A Bit Less Racism And A Bit More Service, If You Don't Mind'

BRITAIN  was united in outrage last night after formula one ace Lewis Hamilton was racially abused by the Spanish, of all people.

Hamilton said he was disappointed by the fans' reaction, adding that he loved Spain even though the service was often slow and greasy.

Foreign secretary David Milliband has written to the mayor of Barcelona demanding an apology, a pint of Grolsch and the mixed grill.

He added: "Are you ever going to finish that fuckin' cathedral, you lazy shits? Looks like it was built by the fuckin' Irish anyway."

Meanwhile angry British holidaymakers have pledged to order everything in a particularly loud voice when they invade the Costas this July.

Denys Hatton, who owns a timeshare near Marbella, said: "This is typical of the Spaniard.

"Last year my wife and I ordered the gammon steaks only to be told they had 'ran out'.

"We were then forced to eat a disgusting pile of rice, peas and incredibly fresh, succulent mussels cooked in a big frying pan. Savages."

A Spanish government spokesman said the incident was a misunderstanding and that the fans had painted their faces black to celebrate the festival of Santo Ignacio de Loyola.

He added: "It commemorates the day when Ignacio forced a black man to sit on a donkey before pushing them both off a cliff." 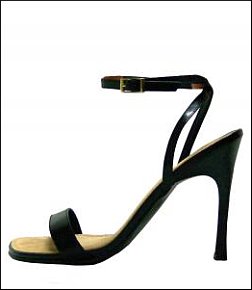 WOMEN who wear high heels have poor sex lives because they only attract men who are premature ejaculating foot fetishists, a new study reveals.

Tottering around in black patent leather six-inch stilettos, teamed with a ra-ra skirt and nylon stockings does provide women with a wide range of potential sexual partners from which to choose.

However, the research suggests that 85% of them are incapable of penetrative intercourse because they have already ruined their date’s shoes with copious amounts of ejaculate.

“So as an adult even the thought of Kylie Minogue trampling up and down on his chest in a corset and a pair of peep-toe Manolo Blahniks is enough to…oh Christ, not again.”

Nikki Hollis, 26, said she had started wearing trainers and dating scruffy indie guys because she was sick of getting her expensive high heels covered in a sticky mess.

She said: “I brought one bloke home last week, stripped down for some action, put my foot on the chair to remove my shoes and he went off all over my Jimmy Choos. Next day I had to give them back to my mum.

“The previous one only got as far as the bus. He was following me up the stairs to the top deck, took two steps and then exploded in his trousers. A lucky escape, I suppose.”