Ronaldo To Star In Remake Of ‘Roots’

FOOTBALLER Cristiano Ronaldo is being lined up to star in a multi-million dollar remake of the epic TV series Roots. Ronaldo has demanded £3.5m per episode

Producers say the star's treatment at the hands of Manchester United make him the perfect choice to portray the young African slave who is beaten by his brutal masters.

The Portuguese winger said he had been traumatised by 'outrageous' demands that he honour the £125,000 a week, legally-binding contract, which has brought him only, misery, adulation and Gemma Atkinson.

Speaking from the titanium gazebo in the rose garden of his 31-room mansion, Ronaldo said: "I feel I can relate to the suffering of African slaves.

"If anything, it is worse, because footballers cannot sing while we work, whereas they had time to develop gospel music during their 16-hours shifts before dropping dead from exhaustion."

In the series a young African boy is dragged from his homeland and shipped to America where he is forced to work in the fields by a cruel and violent plantation owner.

"The similarities are uncanny, though admittedly, the Lear Jet that flew me from Lisbon to Manchester wasn't packed with 150 other players sleeping head-to-toe."

Ronaldo also conceded that, while the slave-master in Roots administered brutal beatings, Man Utd boss Sir Alex Ferguson had nurtured his talent, lavished him with praise and turned him into one of the best footballers in the world.

"But without the freedom to do whatever I want, wherever I want, for whatever fee I want, I am exactly the same as a cotton picker forced to live in a shed, dying at the age of 32."

He added: "I know the people will love my acting. Already, in the streets, I hear many of them calling me 'Kunta'." 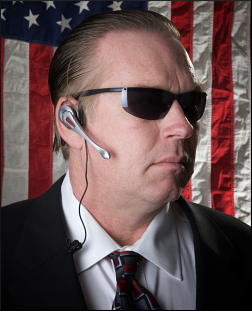 ANGELINA Jolie is expected to give birth to twins within hours after bodyguards took up positions outside her vagina. Jolie and partner Brad Pitt have hired former US Navy Seals to stand guard at her private area and ensure the superstar babies are not harassed by members of the medical team.

Retired colonel Wayne Hayes, said: "We do not want the medical staff attempting to talk to the babies, we don't want them approaching or trying to touch the babies.

"There will be no autographs or photos, and unless you have the very highest code-word clearance, you will not even be allowed to look at the babies.

"The cervix will not dilate until we have given the all-clear. At that point, Team B will move into position, essentially establishing a 'wall of force' between the target and any possible threats.

"Once we are satisfied that Ms Jolie's vaginal area is secure, we will then form a 'tunnel of protection' to transport the target out of the birthing suite and into a Dodge mini-van."

He added: "A clean-up squad will remain at the facility, securing all cameras and cell phones, placing them in a bag and shooting them."

The couple, who have a daughter named Shiloh, are expected to continue the American Civil War battle theme and have drawn up a short-list of names including Gettysburg, Manasas, Chattanooga and Fort Sumter.