THE spring potato crop has been lifted and the pitch in Moscow's Luzhniki Stadium is now ready for the Champions League final, officials have confirmed.

Teams of tractors spent all day turning over the rich, clay based soil, scooping out the hundreds of thousands of potatoes that will be used to build Russia's new generation of nuclear power stations.

"As a boy I love to run on freshly dug field. Good for make strong knees and anklings."

He added: "Your players will have super-duper time and, who knows, maybe they find nice potato to take home?"

Meanwhile Sir Alex Ferguson has stepped up his psychological battle with Chelsea boss Avram Grant by claiming the entire Manchester United squad has been kidnapped by an evil witch.

He told a press conference in Moscow: "She flew in through a window and gathered them all up in a great big sack.

"On paper you would expect Chelsea to win this."

Huge Dome To Be Placed Over Middle East 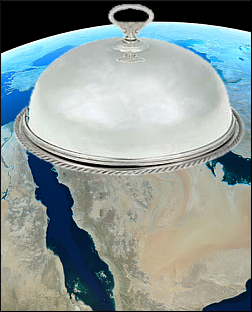 A MASSIVE silver dome should be placed over the Middle East until all the explosions have stopped, the UN secretary general said last night.

Following predictions the region would soon be rife with nuclear weapons, Ban Ki-Moon unveiled plans for a huge dome approximately 2500 miles across.

The dome would be built in a South Korean shipyard and towed by supertankers to the Indian Ocean. It would then be heaved into place until it covered Lebanon, Israel, Gaza, Syria, and much of Saudi Arabia, Iraq and Iran.

Outlining his new peace plan, Mr Moon said: "Once the dome is in place we expect about 12 to 18 months of constant explosions, followed by silence.

"We will then lift up the edge of the dome and have a peek to see if there are any heavily armed psycopaths still alive.

"If so we'll just chuck in a few sticks of dynamite, slam the dome back down and wait for the big boom."

If the plan is successful Mr Moon said the dome could be melted down and made into napkin holders or placed over the United Kingdom, 'until they learn how to have a drink without beating the shit out of each other'.