Sky apologises for super-ness of Sunday

FOOTBALL pimp Sky Sports has been forced to withdraw claims that yesterday was super. After 88 millionaires, watched by 150,000 spectators, played a total of 360 minutes of football with the result that not one single league position was altered in any way, experts dubbed January 16, 2011 as the most pointless thing to happen in football since Kieron Dyer.

Meanwhile broadcasting watchdogs said that by half time Sky should have rebranded its flagship sports show as either ‘questionable value for money Sunday’ or merely ‘Sunday’.

Commentary for the Birmingham derby was stopped for 30 minutes after viewers heard the sound of the pundits slumping across their desk, followed by the nauseating sound of a hungover, middle aged man snoring like a horse.

Footballologist, Wayne Hayes, said: “The devaluation of the word first started in 1998 when Sky broadcast a four-hour special of the ‘super’ coin tosses of the previous season.

“Following the model of 1920s German hyperinflation, I predict that by 2013, they will be forced to describe the second round draw for the Carling Cup as ‘Holy Shitting Fuckbeans Tuesday Afternoon’.”

“When a goal is scored, subscribers will be treated to the sound of Andy Gray stabbing himself to death with his own erection. Silver lining and all that.”

He added: “It’s made me realise that I’ve been wasting the short span of existence allotted to me by an indifferent universe on whether some arsehole I’ll never meet has a functioning hamstring ligament, rather than trying to find my place in its infinite parade of wonder.

“Still, it’s the City-Leicester replay tomorrow, so that should be good.” 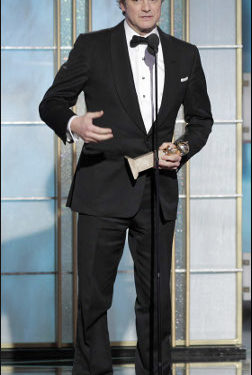 HOLLYWOOD shone like a dazzling beacon of breathtaking glamour last night as a series of pathological narcissists made speeches about how important their pathetic jobs are. Firth is now frontrunner for the Oscar. If you care about that please hold your breath for about an hour

The red carpet at the Golden Globes welcomed the most expensively dressed names in showbusiness, many of whom wore spectacles because they are artists.

Natalie Portman, who was wearing a dress, won best actress for her role as an insane ballerina in a film that sounds unbelievably boring.

The pregnant Oscar favourite said: “Now more than ever, our troubled world needs to see me dressed in a tutu pulling a load of faces to show how mad I am.

“I wish I could have my baby right now so that I could thank it for inspiring me to have it. I love each and every one of you like only a mother can.”

Meanwhile Britain once again proved it was the leading country at everything after Colin Firth won best actor for The King’s Spoon.

Firth has been acclaimed for his heart-rending portrayal of a simple man who, against all the odds, inherits an enormous silver spoon from his dad and then bravely overcomes a stammer armed with nothing but the ability to afford the best speech therapist in the world.

Helena Bonham-Carter missed out on the best actress award amid criticism that her sensitive portrayal of the Queen Mother was short on gin-addled racism and unpaid gambling debts.

But the big winner was The Price Comparers, the keenly observed drama about the birth of moneysupermarket.com.

Screenwriter, Tom Logan, said: “These were ambitious, focused people who decided to do something useful with the internet rather than give countless fucking idiots the chance to share their cretinous opinions with each other.”

In the television categories the night belonged to Glee, the third rate teen soap-opera that keeps viewers awake by shouting Madonna songs at them every 20 minutes.

Chris Colfer, who plays the gayest one, took the Golden Globe for best supporting actor in a comedy, musical, vibrating chair or fish recipe.

The ceremony was presented for the second year running by Ricky Gervais who reminded his UK fans why they are campaigning so vigorously to have his British citizenship revoked.