Surfers prepare for summer of living in wrong country

BRITAIN’S surfers are ready for the summer season during which they might surf as many as five times.

The surfers, who can be identified by their surf clothes, surfboard roof racks and the surf stickers on their cars, are excited about the 12 to 24 breakers they will spend upward of 120 hours catching this year.

Wayne Hayes is one of thousands of British surfers who spend less than 0.9 per cent of each year taking part in the activity around which their identities are constructed

Hayes describes himself as an archetypal surfer dude, has a model VW camper van on his desk at work, regularly watches Point Break and owns six wetsuits.

He said: “Your boy here was born to ride the waves.

“Every fourth weekend I spend 10 hours driving to Cornwall, then another two hours queuing to get to the beach, then four hours in the water waiting for a good spot before I get my surf on.

Professional surfer Stephen Malley said: “Here in Britain there are about seven beaches that get big waves, mainly in October and November when the water’s so cold it makes your balls permanently retract.

“Technically it’s surfing. Technically a Robin Reliant is a motorbike.”

I’d have eaten toddler myself if it was smaller, says 'hero cat' 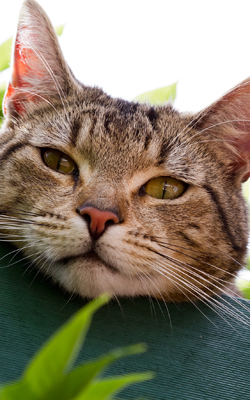 AMERICA’S ‘hero cat’ has admitted she would kill humans if they were small enough to fit in her mouth.

Cat Tara won the hearts of simpletons by apparently saving a four-year-old from a dog attack.

The tabby carnivore said: “I did it because, much as I hate kids, I hate dogs more.

Ive no idea what the kids name is. A ‘name’, as you so whimsically call it, is  just a noise to signal the availability of food.

Describing the perceived bond with her owners, the cat said: I dont recognise the concepts of ownership, family or friendship. I simply go where the protein is.

“I never think about the bipeds that feed me, except in idle moments to imagine them rodent-sized with me slowly plucking their limbs off one by one as they wail in agony.”

As a reward for her brave exploits, heroic Tara was honoured by being allowed to throw the first pitch at a baseball game: “I can’t throw things because my arms don’t swing, this is basic anatomy.

“You may as well ask a cow to drive a golf cart.”

Tara added: “For the avoidance of any further confusion, I am a cat. Cat. Cat.”