The player’s controversial handler and Countdown conundrum Kia Joorabchian has been blamed for the unrest after poking Tevez with a stick during feeding time and showing him photos of Madrid abattoirs.

City manager Brian Mancini said: “He has the finest straw to line his bed, which needs changing every four hours because he shits like a tiger eating curried goat, and every year we toss in a maiden from the village.

“We’ve even stopped parading him through town on the end of a long chain so baying crowds can throw fruit at him.

“I don’t know what more he expects, not least because we’re still confused about how many grunts mean he’s angry and how many mean he wants fresh water.”

Tevez angered many in Manchester by escaping from his United enclosure during a thunderstorm that shorted out his security system and eventually settling in the boiler room in the City Of Manchester stadium, living off rats and chunks of Shaun Goater.

His latest anguished cries for release may see him driven out of the city altogether by torch-wielding locals who have repeatedly warned City’s management that by signing the striker they were meddling with forces they did not understand.

Meanwhile Real Madrid manager Jose Mourinho has employed a gypsy peasant girl to entice Tevez to the Bernabeu before a squad of marksmen sedate him with tranquiliser darts.

Mourinho said: “Capturing Tevez will be our biggest coup since luring Ronaldo with a trail of mirrors and pots of over-priced hair-gel.”

Hurley to decapitate warne after intercourse 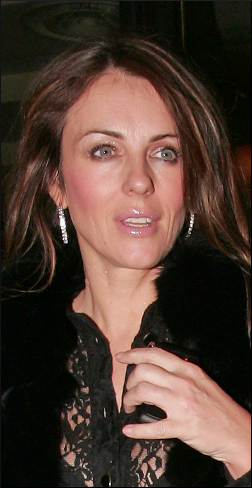 LIZ Hurley has announced the imminent closure of her relationship with Shane Warne.

The novelty actress confirmed that once she has mated with the legendary Australian spin-bowler she will kill him by piercing his abdomen with one of her extended claws before tearing his head off.

Hurley said she would eat part of him immediately and then devour the rest at her organic pig farm near Cirencester.

The star also confirmed her marriage to Indian millionaire Arun Nayar had ended without a satisfactory consummation and the resulting feast.

Nayar said: “I did not become massively wealthy by being stupid enough to think Liz Hurley was not going to rip my head off and eat it.”

But Warne is upbeat about having deadly sex with the star of the unnecessary Bedazzled remake and that one where she played Lord Byron’s girlfriend in which she is so unspeakably bad that you actually stop laughing at her and get really quite angry.

He said: “She’s a wonderful and very sexy lady and I have no doubt that we will be together for the rest of our lives.”

Warne then repeated his prediction that the relationship had a long and happy future despite having the Hurley mating process explained to him seven times, using pictures and hand gestures.

He added: “I think we should get married next Spring.