ANDRE Villas-Boas has been warned not to spend Gareth Bales 100m Euro transfer fee all in one go.

The Spurs manager has been frantically adding Xbox games, Converse trainers and One Direction picture discs to his Amazon wish list since the transfer was negotiated.

Chairman Daniel Levy said: This club has a reputation for spunking transfer funds and Im not sure a 50-foot bouncy castle in the shape of Wolverine is going to dispel that.

Real Madrid placed the world record bid for Gareth Bale after seeing him on the television, being unable to believe thats what he actually looked like and paying for the privilege of seeing him up close for themselves.

Their initial cash-only offer was rejected after Villas-Boas insisted that any deal must include the ride-on lawnmower he saw being used at the Bernabéu, and a penknife.

Spurs fans hope he does not emulate previous managers profligacy. Juande Ramos used the £30M Berbatov fee to have The Gipsy Kings wake him up each morning with Bamboleo, while Harry Redknapp spent his entire 2009 transfer budget on a really nice sheepskin coat.

Vilas-Boas said:and a speedboat, and an iPad and a lightsabre and Edin Dzeko and a BMX, and 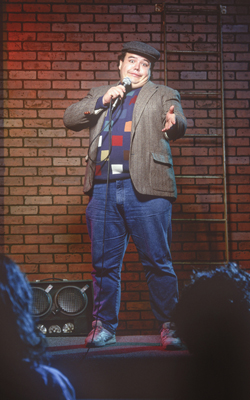 SCIENTISTS are visiting Edinburgh to photograph the exact moment at which a festival performer’s spirit breaks.

Human misery researchers from the Institute for Studies are using special cameras pointed at the stage in a pub basement venue that smells of chips and tears.

Professor Henry Brubaker said: “We hope to capture that moment when a mixture of sleep deprivation, Scottish food and an audience of six people who are basically sheltering from the rain utterly overwhelms a performer.

“Although it has never been captured, it is rumoured that at the very moment of soul-crushing you can actually see a person’s spirit leave their body as a vague greyish cloud, like a Victorian ghost photo.

“We’ve told the acts that we’re journalists from a magazine called ‘ComedyBuzz’. This may be a slight ethical grey area, but you can’t make an omelette without breaking some eggs.””

One of the acts under surveillance is Tom Logan, who is performing a satirical monologue about a corrupt politician who is in love with a sandwich.

He said: “I’ve spent thousands of pounds and poured all my hopes and dreams into this performance. It will be great because I am amazing.

“I’ve already had nine five-star reviews on websites my brother set up. There will be all kinds of agents, TV producers and more than a few sexy girls in the audience.

“Best of all it’s being covered by a magazine called ComedyBuzz. I’m obviously ‘hot talent’.”