CRAIG Bellamy has completed his loan move from Man City to Cardiff after tests confirmed him to be the Welshest man on the planet.

The Championship side had agreed to sign the tiny, agressive striker on condition his Welshness had not been diluted by time spent in cosmopolitan English cities like Manchester and Blackburn.

Bellamy said: “It’s great to be back amongst people who won’t blink an eye when I get angry for no reason and blame everybody else for my fictional problems.

“I look forward to getting them in a drunken headlock and stressing how much I love them while punching them in the face over and over again.”

The striker will be officially unveiled to fans ahead of Saturday’s match against Doncaster with the traditional Crmhylchmych ceremony.

Bellamy will be carried onto the pitch atop the shield of an ancient chieftan before eating a raw daffodil and screaming violent, groundless complaints into the face of an English tourist for eight minutes without repetition or vowels. 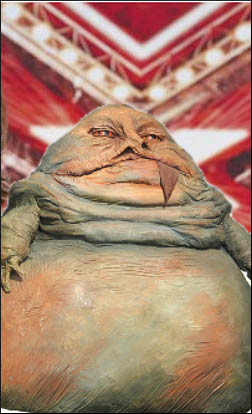 SIX HUNDRED year-old Tatooine crime lord Jabba The Hutt is to replace Dannii Minogue on the X Factor judging panel, it has been confirmed.

ITV welcomed the new addition and revealed that acts which displease him will either be eaten immediately in a single mouthful or hurled screaming into the brand new Sarlacc Pit which will be installed beneath the stage.

The Hutt said: “I am most grateful to the human Cowell. The search for new talent is a pleasing recreation.

“Perhaps we shall be making someone’s dream a reality. Perhaps not. In any case, I shall feed.”

He added: “Bring me Solo and the wookie.

The amphibious blob of fecal matter is believed to have signed to the series for a seven-figure package including two dozen slave girls, a big jar full of eels and the head of Lando Calrissian.

A spokesman said: “Naturally we’re excited to have a star whose notoriety extends as far as Mylok IV, homeworld of the Nharwaak.

“Jabba’s natural sadism and air of cruel insouciance make him perfectly suited to the role. Audiences can look forward to him coming down especially hard on mediocre street dance collectives and anyone who looks like they might jettison their cargo at the first sign of trouble.

“Also, his physique makes him a perfect role model for larger viewers, proving that having a vast, bloated, immobile frame that constantly exudes a pungent mucus is no barrier to a successful career on ITV.