Wenger 'did not see station'

PLANS to make Arsene Wenger the voice of the London Underground have foundered after he failed to get a clear view of a single stop.

The Arsenal manager had been asked to record a number of announcements for the Piccadilly Line, but he was unable to identify any station on the network.

Tube driver Emma Bradford said: “Either his line of sight had been temporarily obscured, or he’d been making notes when we pulled up to a station, or the platform was too far away for him to see it.

“When we got to Holloway Road he spent ages remonstrating with the signalman and then pretended he’d lost his glasses.”

Wenger hit back, saying: “They tell me it is Holloway Road, but I did not see any Holloway Road. To me it looked like, little bit, Dollis Hill.”

Wenger also refused to be drawn on Caledonian Road, Finsbury Park, and King’s Cross, saying: “If the driver says it’s King’s Cross, then we have to accept that, but I haven’t seen the footage yet. I’m sorry, but I can’t speak about something I haven’t seen.”

Bradford continued: “Eventually he got sulky and started muttering about how it was impossible to get value for money in the English train network, and that passengers who were too physical were enemies of transport.” 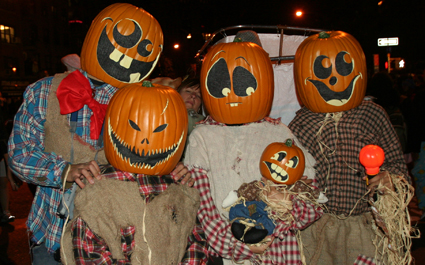 RURAL villages that mark Halloween with funny old-fashioned ceremonies always kill someone at the end, it has emerged.

Folklorist Tom Logan said: “When you read about a village in Cornwall where they roll a burning tree stump down the street while all the children sing a song about somebody called ‘Puckle Jack’, it seems like eccentric traditional fun.

“They tend to gloss over the most vital part, which is the ritual murder.”

Logan highlighted the small Somerset town of Norton Cranwell, where everyone swaps special cakes and there is a procession down the high street involving ‘will ‘o’ the wisp’ lanterns with an old drunkard dressed as the ‘Green Man’.

“It all sounds like brilliant fun, tourists flock from around the world and write blogs about it.