'What are we for?' Welsh forced to ask themselves

RUGBY defeats by Samoa and Argentina have forced Wales into a long overdue questioning of its very existence.

Experts say the best options open to the terminally vanquished country are to be subsumed into the Isle of Man, or used for paintball tournaments.

But others insist both moves will ultimately end in as yet unimagined levels of failure and called for the Welsh to be placed into boats and forgotten about.

A spokesman for the Welsh ‘government’ said: “Thirty years ago our young men had three choices – play rugby, go down the mines or become New Romantics.

“Many still go down the mines and just sit there in the dark doing nothing, while our New Romantics are regularly out-dressed by the exotic islanders of the South Pacific.”

“But just when rugby was once again giving us a reason to be pleased with ourselves, we find it snatched from our grasp like it was some sort of ball.

“I suppose we still have the singing but after a while it does start to grate. A bit like a bronchial cough.”

But the spokesman insisted that Wales would be fine in the long term ‘because Charlotte Church is bound to come up with something’. 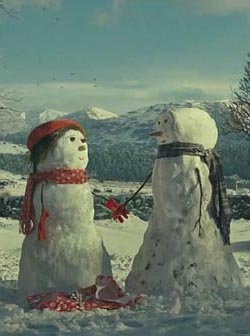 THE traditional John Lewis Boxing Day advert will tell the story of the ‘snow-wife’ returning her new hat, scarf and gloves because she absolutely hates them.

Despite her husband Ian’s bravery and thoughtfulness, Fiona Snowman will set off for her nearest John Lewis store to take advantage of their liberal returns policy.

A spokesman said: “Like most British husbands, Ian bent over backwards to do a nice thing, only to have it thrown back in his face by some fat, ungrateful bitch.

“It’s a Christmas story as old as the Nativity.”

He added: “But now we want to tell ‘Fiona’s Tale’. Her weary disappointment which then builds to a throbbing anger and then her relief when she sees the John Lewis label and knows she will be able to exchange her husband’s stupid, pointless gift – that makes her look even fatter – for something she actually wanted.

The advert will show Fiona setting off across the fields, to the strains of Two Tribes, as Ian wakes up to find a note which reads: “I’m made of snow – why would I want to keep my head warm?

“If those children hadn’t removed the hat, you’d have spent Christmas with a headless corpse. What the fuck is wrong with you?”

Meanwhile, a BBC Newsnight investigation is set to finally reveal where Ian got the money.

A spokesman said: “Unfortunately, Britain’s alleyways are filled with Conservative MPs who crave the cold, wet mouth of a snowman.”