THE All-England Tennis Club has scrapped its traditional rules in a bid to preserve centre court for pretty Russian girls with pert buttocks, instead of the ox-like munters who win most of the time.

In the new version of tennis, sylph-like maidens will have a playful knockabout for an hour or so and make soft moaning noises when striking the ball.

Between sets they will rub oil into each others thighs and at the end of the match will congratulate each other with a wet, lingering, tongue-filled kiss.

The umpire will be replaced by a 1970s comedy smut actor such as Robin Askwith, who will abandon the traditional scoring and instead say 'cor blimey' every time a player bends over to touch some balls.

A spokesman said: "Basing women's tennis on skill and points has allowed it to become overrun with lesbians. And by lesbians I mean the snorting, big-armed sort that like KD Lang, not the excellent ones you get in pornography."

He added: "Some of them are competent sportspersons, but shouldn't they really be in the TA or delivering furniture?"

Tennis fan Wayne Hayes, from Hitchin, said: "I bought a ticket last year and was horrified when this pair of man-hating heffers lumbered on and started belting the ball around like it was a testicle."

He added: "This new plan sounds very good. Maybe they could just go straight to the showers, which could be moved onto the pitch or whatever they call it. Then they could close the new roof so the CIA satellites can't see me touching myself."

Stocky, unattractive female players will still be allowed to participate in the tournament though their matches will be moved to a designated area of the carpark marked out with coats and nicknamed 'Monster Island'. 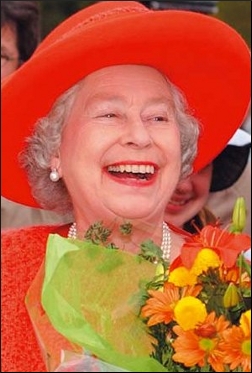 THE Queen is demanding a 20% increase in the civil list so she can buy herself a really fancy new hat and refurbish some of her old ones.

According to Buckingham Palace accounts, by 2012 the Queen will be greeting shoppers at the Windsor branch of Tesco and taking in sailors unless we give her a £40 million hat fund immediately.

In recent years the Royal Household has struggled to keep pace with the wear and tear on the sovereign's hat collection. Last month the entire left-hand side of one of the blue hats was cordoned-off by engineers who said it is dangerously close to being completely unwearable.

Published accounts show the Queen costs each UK citizen 69p per year, with just four of the pence being used for the purchase and maintenance of hats, balaclavas and ear muffs.

Bill McKay, a mentally handicapped royalist from Hatfield, said he had heard that the Queen was excellent value for money.

"She works very hard with those horses, scrubbing their hooves and flushing their backsides twice a day. The least she deserves is a really nice hat."

He added: "And remember this – abolishing their monarchy left the French with nothing more than lots of beautiful palaces and the biggest tourist industry in the world."

A Buckingham Palace source insisted budgets were under strain, adding: "Philip is forced to launch five times the average national wage worth of buckshot into some geese every year, and bribing footmen to keep schtum about all the bumming isn't cheap either."

"Then we could sell the eight houses, buy her a nice vicarage in Berkshire with a staff cottage and an acre of garden and use the rest of the money to build a state of the art hospital for sick children. Or is that communism?"