World beginning to realise that sport is evil

SPORT is an entirely negative influence on humanity, it has been confirmed.

Following the latest doping scandal in athletics, experts believe it is past time that everyone stopped doing sport.

Professor Henry Brubaker of the Institute for Studies said: “Sport might seem exciting when shown in a jazzy montage on a television advert for a soft drink, but in reality it is very dull.

“Quite apart from everybody injecting themselves with monkey glands, nobody likes athletics. It’s like amateur dramatics in that the participants quite enjoy it while the audience is thinking about what they’re going to have for tea.

“Footballers are just a bunch of overpaid knobhead philanderers with weirdly geometric hair transplants, while the fans are inexplicably angry with each other because of geographical differences.

“Cycling is weird and essentially for people who are too boring even to be Christians.

“I think darts and snooker are okay, let’s keep them and board games.”

Time traveller dismayed to see that urinals are still around 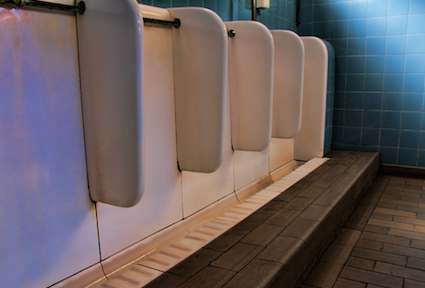 A TIME traveller from 1964 has expressed his shock and disgust that men are still urinating into a trough.

Martin Bishop, 38, travelled 51 years into the future and was suitably impressed by advances in technology but devastated by the lack of civilised toilet facilities.

Bishop said: “You have come up with 120 new ways to view pornography on the move, but you haven’t got round to fixing the unpleasant business of having to piss next to a total stranger?

“I managed to build a time machine in a decade where hallucinogenic drugs were all the rage. And here you are still living like animals. Have you no self-respect?”

Public toilet designer, Tom Booker, said “He has a point. We basically got to hand dryers and then stopped.

“Someone did come up with some kind of ‘cubicle-lite’ idea but then Dyson hand dryers came out and we all got distracted.”