NEED to learn about the Premier League so you can fit in with the real men? Fake your knowledge ahead of the new season with this guide.

Which is the best team in the Premier League?

Liverpool or Manchester City. Nobody can confidently say who is better, so just randomly declare one to be superior and wave away any suggestions that you’re talking shit. Believe it or not this will win you bonus points from lads who have been properly following the Premier League for decades.

No. They have gone from being unbeatable to awful despite spending hundreds of millions of pounds trying to fix the issue. This defies logic, but you can explain it away simply by saying, ‘United’s trouble is a toxic culture from top to bottom.’ This defies logic, but it’s vague enough that people will sagely nod in agreement.

Who are Nunez and Haaland?

Who will be relegated from the Premier League this season?

It would make sense to say the three teams promoted up to the Premier League at the end of last season. Proper fans will see through this though, so suggest that Fulham have ‘done some business’ and only need to ‘do a Brentford or even a Brighton’. It doesn’t matter if you have no idea what you’re saying, it sounds like it means something and in pub football chat terms that’s a bullet-proof argument.

Isn’t the World Cup happening during it?

Yes, and it’s absolute, total bullshit. Footie boss Sepp Blatter trousered millions by awarding the World Cup to a country where balls melt on contact with the ground, meaning the Premier League will be suspended for a few weeks after Christmas. Earn respect from your more masculine peers by saying this effectively renders the season null and void.

Seems like it. The girls play in the Women’s Super League which starts next month. The best two teams are Chelsea and Arsenal. There’s no World Cup in the middle of the WSL fixtures either. Not that you need to know any of this, you can get away with making a misogynistic comment or grunting with sexual frustration when they run on screen.

Who is the best Premier League player?

Go rogue. Everyone will say either Mo Salah, Kevin De Bruyne or Ronaldo, but these are the basic bitch choices. Put your mates in their place by saying you like the look of Orel Mangala at Forest. When they look at you with a puzzled expression, smugly tell them to do their f**king homework and pray they don’t ask any follow-up questions. 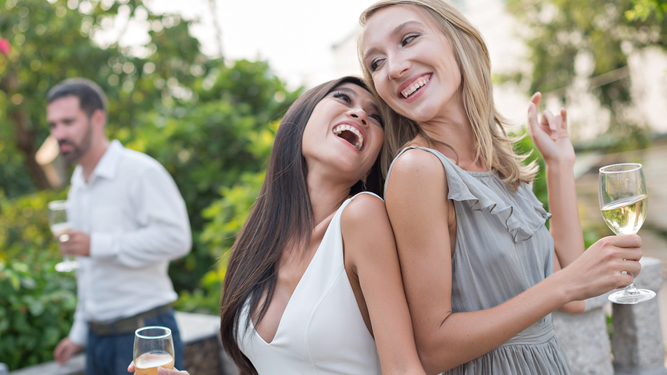 A GOOD few spritzers at a garden party are harmless, right? You may revise that opinion after having a violent drunken row or blacking out and pissing your shorts. Here are some summer drinks to be wary of.

Doesn’t even taste alcoholic, but it’s 25% by volume. With cucumber and mint it’s basically a salad, but vegetarians don’t have a meal then slur their words and become horribly argumentative – and they have reason to be angry, eating crap like broccoli linguine instead of proper pasta containing a Peppa Pig’s worth of bacon.

At a mere 6% ABV this is a fun, not-too-strong drink for lovely young women to get tipsy on. However, criminologists have found it’s responsible for more vicious violence than any male pub brawl, such as sticking a stiletto heel in someone’s face.

Blue Hawaii, and any ‘fun’ cocktail

You would never normally make yourself a drink of rum, vodka and curacao. In large, garden party servings, these unfamiliar drinks will become an accident waiting to happen – either a metaphorical one, such as coming on to your host’s 17-year-old daughter, or a literal one as you suddenly keel over with all protective instincts disabled and knock your front teeth out.

Beer drinkers imagine this to be a lighter, fruity summer drink. But with wildly varying alcohol levels between brands, it’s easy to end up blackout pissed in true West Country fashion. You’ll regret that one-night stand you remember nothing about when the GP diagnoses you with sheep tics.

Making punch is always left to someone with little experience of alcohol, eg. the host’s devout Christian friend from uni. Confused by amounts and flavours they’ll end up making something that would instantly deck Peter O’Toole. In an injustice typical of life, they will then drink lemonade all evening while you utterly humiliate yourself, talking utter shite and finally stumbling off for a lie-down, during which you piss in a cupboard – or worse.