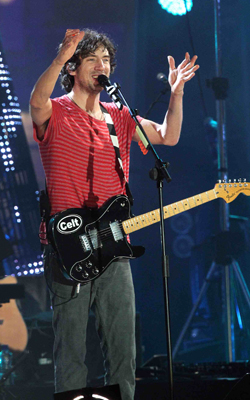 MUSICAL mirth hoovers Elbow have been asked to compose a sonic weapon for the 2012 Olympic Games, it has emerged.

The resulting six minutes’ worth of turgid misery will be used on all BBC Olympic coverage and also played on a loop through the Olympic Stadium’s PA to crush the spirits of Team GB’s competitors.

Dubbed the ‘Bedwetter Audio Bomb’, it is hoped that the ruse will confer an unfair advantage on UK athletes without breaking any rules.

Dr Helen Archer of the Institute for Studies has created a computer simulation to demonstrate the effect on foreigners of music which is much slower and more anguished than they are used to.

She said: “Elbow’s One Day Like This, even at double speed, would cause them to intentionally run into the path of a javelin whilst begging for merciful death.

“The simulation also predicts that after just a few bars of Grounds For Divorce Usain Bolt will be wrestling the starter to the ground and then jamming the stolen pistol into his own mouth.”

However Dr Archer’s model anticipates that British athletes would be no more distracted than they usually are.

She explained: “The majority of Team GB has lived their life under the Coldplay regime. This in turn has increased their natural immunity to morose bedwetter music.

“I am also recommending intense training sessions under Radiohead conditions to ensure their gloom tolerance is maintained at the highest level.”