Royal effigies 'a breach of copyright' 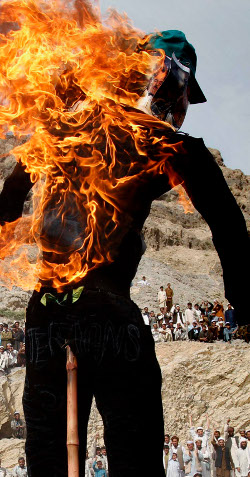 FERVENT anti-royalists planning to burn effigies of William and Kate have been warned against making their own bootleg figurines.

The stern message comes after a group of self-styled Muslim ‘extremists’ who almost certainly live with their mums, announced plans to incinerate their own crudely-fashioned dolls of the royal couple.

A spokesman for Royal Wedding Limited said: “This kind of activity is damaging to cultural cohesion, the notion of enduring love and our internationally protected brand.

“Officially-licensed organic Kate and William burnable effigies are available from John Lewis, the Highgrove shops and the Party Pieces website.

“They release a delicate lavender fragrance when torched, although they are equally suitable for being stamped on or smashed repeatedly with a large blunt object to cries of ‘death to the infidel’.

“Our official effigies will really make your wedding protest special, whatever your ideology. Just £29.99 and strictly limited to however many we can sell.”

Unremarkable subject of the Queen, Tom Logan, said: “Apparently these effigy-burners are a real threat to our society and a damning indictment of what happens when you treat foreigners as equals.

“But when I was nine I put my brother’s Action Man in the oven until it was just a pool of light brown liquid. This didn’t seem to break the actual army or something.

“I’m just saying, it all seems like a right load of fucking bollocks.”