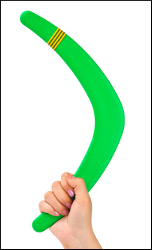 FANS of the troubled Pernice Boomerang handset have been disappointed following the long-delayed launch of the v-shaped personal organiser. Persistent glitches have meant that all software has had to be removed and the Â£199 device is nothing more than an actual boomerang.  A Pernice spokesman: “It goes quite far though”.

Users of the Lang 786 series of laptops from 2003 are stranded in a virtual August after a software fault meant that their machines failed to acknowledge the beginning of July. Over 4,000 Lang users have been reported missing, but as 786 tech support ended last year, they are not expected to return.

There’s a major announcement imminent later this week from Chong. I’m betting it’s either a re-duddified version of the Camel X-7 or a new VGF for the Spazzmo.

PRODUCT TEST: MANNHAUSER DF-66 TABLET COMPUTER – Â£299
They’re calling this the ultimate iPad killer and although that’s a potential exaggeration, if you hold it in the air and activate its iPad-destruction app, green smoke will emit from its anus. No iPads were destroyed during our test.

The DF-66 is one of the first tablets to run the new Claypole-Gadzooks firmware – as a result it grows a jester’s hat and a full beard in about a week. Users can then style the beard to their own liking with the add-on customising kit or with a pair of standard nail scissors.

MINUS POINTS: The incessant, unstoppable playing of Billy Joel’s We Didn’t Start The Fire.