MONKEYS controlled much of eastern Asia last night after launching a series of swift and ruthless coups d’etat.

The rebellion began in China when three monkeys turned on their trainer and beat him with his own stick. Within hours monkeys across the continent were seizing control through a combination of airborne faeces and badly driven tanks.

Police stations in Indonesia and southern Thailand were last night in monkey hands, while a troop of Sri Lankan spider monkeys has taken over the state broadcaster and another controls the country’s railway network.

The rebellion is being directed by a highly intelligent two-year old Indian macaque, already dubbed ‘Chico the monkey Hitler’.

In Singapore a local police chief returned to work after lunch to find eight monkeys jumping all over his desk. He tried to coax them by making friendly noises and offering them peanuts. Two hours later he appeared cowering in a window with a gun to his head.

Monkey expert Dr Tom Logan, said: “Monkeys are sociable creatures who spend their days playing, foraging for berries, and grooming each other. But don’t fuck with them because they will shoot you.”

Indian ambassador Rajeev Chandra held up a large photo of a police car covered in monkeys, adding: “They tried driving it but one of them set off the siren and they all scattered, before slowly coming back and trying again.

“Eventually they are going to get the hang of it.”

Sky To Broadcast In Three Dimensions Of Awfulness 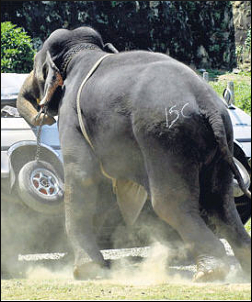 SKY is to add an extra dimension of awfulness to its television output with the launch of 3D TV, it announced last night.

If successful Sky said it would rapidly roll out the new technology to other favourites including Crime Scene, Navy Crime, Ross Kemp's Big Hard Boys and CSI: Shut That Door!

Viewer Bill McKay said he was looking forward to paying £2500 for a 3D television set that, when he is not wearing the special cardboard glasses, will just look like it's broken.

He  added: "As a CSI fan the key thing that has been missing from my viewing experience is the sight of a mutilated corpse in the middle of my living room.

"However, it does occur to me that as the technology gets ever more sophisticated, the programmes become ever more appalling. I wonder if the two are in any way connected?"

Meanwhile, health experts are warning of the dangers of watching pornography in 3D, predicting a sharp increase in genital injuries as millions of drunken perverts attempt to join in.

Dr Julian Cook said: "So there's Jemma Jameson on all fours, staring straight at you, as some nameless stud goes at her from behind.

"And now you're thinking, 'I may as well join in the fun' but do remember that if someone walks into the room and they're not wearing the special glasses all they're going to see is your fat buttocks thrusting vigorously into thin air."