No Such Thing As Arsehole Bees, Say Experts

THERE is no bee equivalent of a lazy, self-centered arsehole who offloads all their admin onto you, according to new research.

A four-year study into insect swarm behaviour found that bees exist in a state of perpetual co-operation and never lock their larvae in the hive, get pissed and start chinning each other outside a bee nightclub.

The research also revealed that ant colonies work together to eradicate danger instead of automatically assuming that it's someone else's problem and calling for the deportation of unskilled foreign ants from outside the European Union.

Professor Henry Brubaker, of the Institute for Studies, said: "Life on earth is infinitely varied, from creepy, deep-sea ghost fish to those weird little bats that look like Graham Norton.

"But it seems only humans would gleefully fuck each other over for the sake of a Christmas bonus."

Professor Brubaker said the findings echoed the plotline of the film Antz, but without all that neurotic, New York Jewishness.

The study also found that while bees help frail, old bees across the road, it confirmed suspicions that wasps are a bunch of arrogant, two-faced bastards that wouldn't piss in your face if your teeth were on fire.

Is Ofcom Run By Poofters? 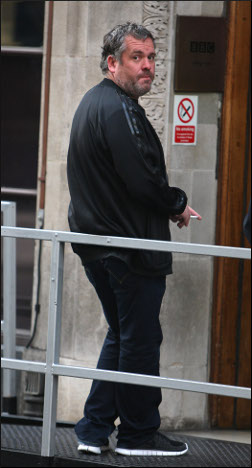 CONCERN was growing last night that Ofcom, the media watchdog, is being run by a bunch of nancy-boy poofters.

The regulator was accused of flaming gayness after it launched an all-out hissy fit against Chris Moyles, Radio One's morning oaf.

Moyles was censured for singing like a whoopsie in a way that could offend other whoopsies, as well as being generally horrid and dressing like a binman.

An Ofcom spokesman said: "After careful consideration we've decide that he's just a big, fat, ugly piggy-wig. And talk about rough trade, I wouldn't touch him with yours.

"I'm sure he thought he was being oh so hilarious but he was actually being a total bitch. The BBC needs to tell him to just be nice."

Media analyst Julian Cook said: "While Ofcom being queer is not, in itself, a problem, one thing that is guaranteed to provoke negative feelings towards the gay community is a major public body issuing terribly important statements every time a stupid DJ makes a stupid joke about a stupid pop star.

"Ofcom needs to realise that people can work out for themselves that Chris Moyles is a tit instead of launching a major investigation every time some arsehole picks up the phone."

Cook, who admits his first name is slightly poofy, added: "Everyone needs to calm the fuck down and stop being so gay about everything."