RUFUS the hawk has entered the Wimbledon men’s semi-finals despite never having played competitive tennis.

The All England Club has exercised its ancient right to replace a foreigner with a UK bird of prey if a reigning British champion has been defeated.

Trainer Emma Bradford said: “Rufus is only here to murder pigeons and blind people who shout ‘Come on Tim’, but over the years he’s watched an awful lot of tennis so must have picked it up.

“He hovers while holding the racket in his talons. He gets a huge amount of topspin on his forehand.

“He’s also fiercely competitive, has excellent eyesight for disputed line calls and does not use the f-word.

“I would advise the ball-boys not to scurry so much. It makes him think they’re voles. It could get very nasty.”

Rufus is expected to beat his challenger and go on to Sunday’s final unless he is given too much meat and decides to perch on the net while sulking.

Commentator Sue Barker said: “He’s got the single-minded determination, the cruel beak and the sleek interlocking feathers we see all too rarely at this level.

“And the British public have already taken him to their hearts because, unlike Scottish people, he is successful.”

Airports to combine body searches with eating, shopping and the toilet 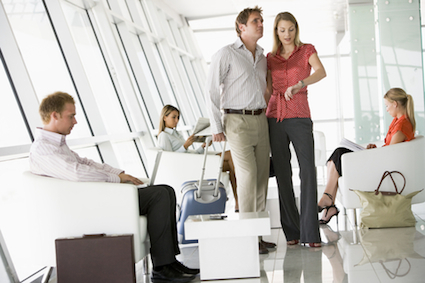 AIRPORTS are to minimise delays by searching your insides while you eat, shop and go to the lavatory.

In a bid to foil terrorists, air passengers will be ushered quickly into the departure lounge where they will experience a seamless internal examination while making full use of the airport’s facilities.

A Heathrow airport spokesman said: “You’ll be able to enjoy your pre-flight drink or snack while the busy fingers of our security staff go to town on your bottom.

“You’ll also be able to wander aimlessly through duty-free as normal. You’ll just have a colonoscope hanging out of you which is linked to an iPad using a bluetooth ‘dongle’.

“It’s all about making sure you don’t get bored.”

The spokesman added: “You probably don’t want tubes and fingers in you while you’re doing the toilet, so we’ll use that time to give you a full-body x-ray.

“Hopefully the machine won’t inadvertently irradiate your bladder, thereby turning you into a bomb.”