Ask Holly: Dear Brooklyn, Don't worry, there are lots of children in my school with silly names too

Dear Holly,
I got a lovely new tattoo on my foot saying ‘made in England’ and instagrammed it because, in these turbulent times, I have absolutely nothing better to do. But now everyone on social media is laughing at me and I don’t know why. They’re saying it’s because I was named after the place where I was ‘conceived’ but I don’t know what that word means. Everyone is saying lots of stuff and now I’m really confused and my head is all hurty, can you help?
Brooklyn,
England

Dear Brooklyn,
Don’t worry, there are lots of children in my school with silly names too, most of which were coined by Netflix and HBO. For example, in the reception class there are several girls called Daenerys; two boys called Eleven, a boy called Soprano and one little fellow called Breaking Bad. These days, first thing in the morning, the teachers don’t bother with an old-fashioned register: they just read out the TV supplement from the Radio Times.
Hope that helps!
Holly

Open-air Shakespeare much easier to just f**k off from 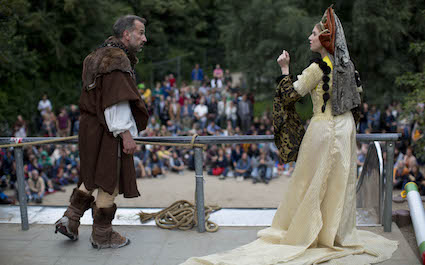 OPEN-AIR productions of Shakespeare are much easier to sneak away from when you get bored, is has been confirmed.

Audience members at a recent production of Measure for Measure in Cardiff’s Bute Park found that the unenclosed setting meant they did not have sit all the way through one of the Bard’s dreaded ‘comedies’.

Susan Traherne said: “All Shakespeare should be like this.

“We only realised when the teenagers next to us nipped behind some foliage for a spliff that we were unpoliced and could free ourselves from all the iambic pentameter.

“At the bit where the Duke disguises himself as a monk – which made my stomach lurch with fear at what hilarity was to come – we simply packed up our picnic and fucked off back to the telly.

Actor Julian Cook said: “Actually in the early 17th Century a lot of people would bugger off early and go home and stare at their mud walls instead, so it’s historically accurate.”