Ask Holly: How can I cheer myself up after such flabby orange ghastliness?

Christians must have cheerful faces full of joy, yet my recent house guest has left me with a foul grimace and a heavy heart. How can I cheer myself up after having been in the presence of such flabby orange ghastliness? I’ve tried listening to Happy by Pharrell and now I want to stick my head in the oven.

My teacher says that there are many awful people in the world who want to take things that don’t belong to them or be a member of UKIP. But she says that for all those unhappy, misguided people, there are many more happy, kind people who want to help others and share and be kind and bring light into the world. They are called ‘ravers’ and we shouldn’t judge them for taking recreational drugs and dancing to techno music. 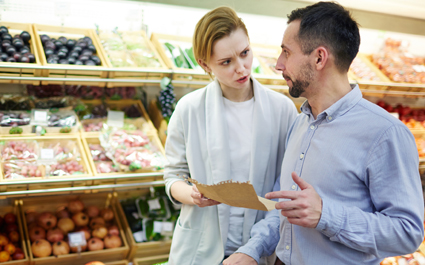 A COUPLE disagreeing on which tinned tomatoes to buy are both wondering if the real problem lies elsewhere.

Wayne Hayes and Carolyn Ryan have been bickering about whether to choose peeled plum or chopped tomatoes for the past ten minutes, with both now experiencing a creeping doubt that perhaps their differences go beyond groceries.

Hayes said: “Maybe we have slightly different preferences when it comes to tomato texture and subtle variations in acidity, but maybe it’s because we haven’t had sex for three weeks.

“Personally, I think the supermarkets’s own brand of chopped tomatoes is fine – and she used to agrees.

“She used to like those tomatoes three times a week, sometimes five times if she was feeling really in the mood for a good tomatoing. She could not get enough of those tomatoes, which she now suddenly hates.”

Ryan said: “Do you really want to live the rest of your life with one tomato? It’s a question I’ve been asking myself a lot lately.

“When you look around the shelves there are so many different types of tomato, some of which look delicious.

“Anyway that’s all it is, not big deal.”