Ask Holly: I am pleased with myself for winning Bake Off

We do baking at school but we’re not allowed to use sugar because it is banned, or wheat because three of us have a wheat intolerance, or milk because seven kids are lactose intolerant, or nuts because the teacher has a nut allergy. Meat isn’t an option because there are several vegetarians, and we can’t use dairy because there is a vegan (who no-one likes). So in baking class we do painting instead. 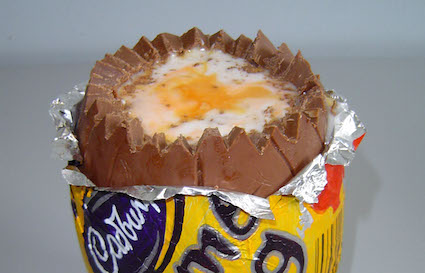 SCIENTISTS have confirmed that you are not ready for an Easter egg-sized Cadbury’s Creme Egg.

Humans have long craved a Creme Egg the size of a child’s head, but scientists today revealed we could not handle it, physically or emotionally.

Professor Henry Brubaker of the Institute of Studies said: “We created one in a lab and brought in a cross-section of society to try to eat it. Twelve of them are now permanently insane.”

Test subject Martin Bishop said: “It was like eating a hand grenade made of sugar. I went temporarily blind halfway through.

“I kept munching though, even through the darkness, because I really like Creme Eggs.”

Nikki Hollis who also took part in the test added: “I was spooning the fondant out like it was soup, but passed out after three big mouthfuls.

“While unconscious I had a vision of going to an Inca-style temple made of chocolate and fondant and meeting Sug-Ra, the god of extreme sweetness, who told me I had been very greedy.

“But when I came to I carried on eating the fucker.”