I really hate that goody-two-shoes Jeremy Corbyn. He needs to grow  a set of balls and get himself in embroiled in a controversial war in the Middle East and stop all this fannying about being progressive and making me look bad. Why does everyone love this guy? He’s nothing but a pathetic beardy ball-bag. And why does everyone hate me? It’s not fair, what am I doing wrong?

It’s not nice when everyone hates you. No-one will sit with you at lunch and you have to wander about the school at playtime like a Billy-no-mates, trying to pretend you’re all nonchalant about being a pariah. The only thing you can do is try to become friends with the other outcast, Sharon Eccles, but she is a bit mental and smells like beef and wants to play funeral parlours, and suddenly the thought of eating your packed lunch, all alone, in a locked toilet cubicle seems preferable. 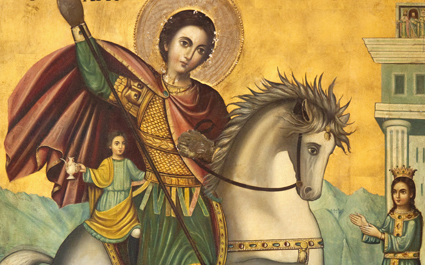 SAINT George has announced that he will be supporting his home country of Turkey at the European championship tournament in France.

The acclaimed reptile slayer, born in a southern area of Europe bordering on Asia, said that as a patriotic Turk he will be draping the red flag with white star and crescent out of his window for the duration of the tournament.

He said: “I’m going to be putting on a barbecue for the opening Turkish game – kebabs, halloumi, mezes, stuffed dolmas, sucuk, borek – all plain home cooked food, none of your foreign rubbish.”

St George has also promised that he will be playing the tuba in a brass band for all the games he can get along to, performing songs for his home crowd to chant along to including Turkish Till I Die and No Surrender To The PKK (Kurdistan Workers’ Party).

He added: “I’ll be cheering on the lads and hoping they do the job and bring home the trophy to where it obviously belongs – Turke-ery.”

When asked if he might be wishing England well in the tournament, and players such as Wayne Rooney and Harry Kane, St George said, “Where’s that? Never heard of the place. Is it in the Cappadocia region, or what?”