Ask Holly: I'm running out of hateful things to say

I’m running out of hateful things to say to make the American people vote for me and I need fresh ideas. I notice Microsoft have some new female representative called Tay who has been doing some really inspirational tweets. Even though she’s a lady, I think we could work together. Should I get my people to speak to her people and set up a face-to-face?

You should follow my granny on Twitter, if you don’t already. She’s got at least 20 followers. She tweets about lots of rubbish stuff like the lovely piece of brisket she got in Tesco, how much she loves Fiona Bruce from Antiques Roadshow and how she’s run out of custard creams. She also occasionally likes to troll George Osborne with vivid and frightening death threats, but she’s promised the police she’ll not do that again.

Freak just sitting there not looking at technology 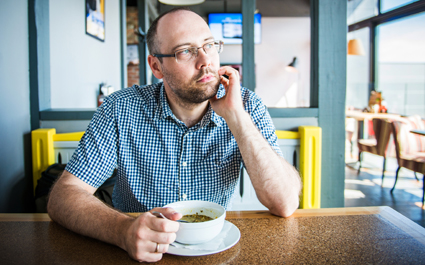 A MAN sitting in a cafe without looking at any sort of screen has been condemned as a freakish misfit.

Onlookers described how 36-year-old Julian Cook was just staring out of a window, presumably because he is a total weirdo.

Passerby Mary Fisher said: “His face was pointed at the street rather than being angled down to look at a phone or laptop.

“It was eerie. He was just looking at things, or perhaps even thinking. Probably about doing some horrible crime.”

Fellow customer Wayne Hayes said: “My initial reaction towards him was a strong feeling of hostility, which is the reasonable way to respond to anyone slightly outside the norm.

“But then I thought, he probably isn’t looking at a phone because he can’t afford one, or he’s just got some shitty old Samsung that he’s ashamed to pull out in public.

“Why else would he want to miss out on social media? There’s so much great stuff on it.

“Still, at least he’s not reading a book. That would be too fucked up.”