Every time I give a lady one of my 'special cuddles', she ends up with a baby

It seems that every time I give a lady one of my ‘special cuddles’, she ends up with a baby in her tummy which is confusing to me: I thought babies were delivered by the stork. What am I missing here?

We haven’t done that bit in school yet, I’m afraid, but if you want to know anything like that just go and ask Phillip Holliday, the big weirdo from Mr Morley’s class. Rumour has it, Philip is actually 16 years old but he has been held back in primary school for several years because he’s really thick and also Mr Morley needs someone strong to help carry all the sports equipment for PE. Phillip may be utterly useless at long division but he’ll tell you all about where babies come from if you give him a Wagon Wheel. 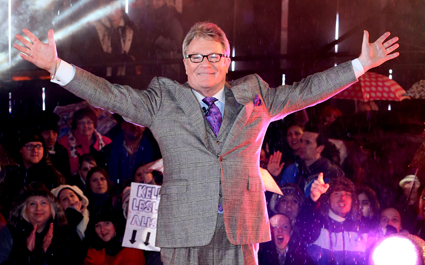 BRITONS are concerned they have woken up in an alternate dimension after seeing crowds cheering Jim Davidson.

The comedian won Celebrity Big Brother last night, leaving many concerned that they have somehow fallen into another reality where everything people like or hate has been reversed.

31-year-old Emma Bradford said: “People on telly are saying Jim Davidson is a smashing bloke. Is everyone else seeing this, or is it just me?

“Is Gordon Ramsay now a shy, self-effacing Waterstone’s employee? Is the Daily Mail espousing the virtues of gay sex? Are the laws of physics reversed too, so that it rains from the ground into the sky?

“I’m staying in the house today.”

Plumber Roy Hobbs said: “I’m seeing it too. But it can’t be real, it must be some sort of shared hallucination. Maybe it’s North Korea bombarding us with LSD gas.”