I plan to give my wife a good interrogating

Having decided to throw in the towel at Newsnight, I am looking forward to getting to go to bed at a decent hour, and possibly show my wife a good time in the process. My plan is to interrogate her vigorously and without mercy and then patronise her until she begs me to stop. Should I wear a suit?

I think my daddy will be sad that you are leaving Newsnight, as he is an avid watcher. My mummy says it’s a really boring programme and goes to bed when he puts it on. But I think she’s confused, because last time he was supposed to be watching it, I got out of bed and hid behind the sofa and there were two pretty ladies on the TV, and then a muscly man turned up with his shirt off who I think was a plumber. But I don’t know what happened next because my daddy saw me and sent me back to bed. 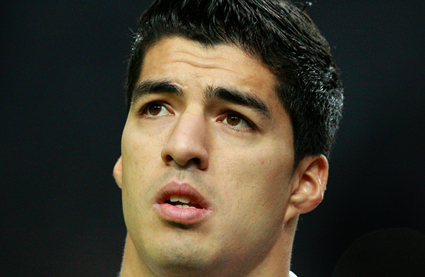 THE Uruguay team known to fans as La Familia Negritos are preparing for tonight’s clash in the Negrito World Cup.

Luis Suarez, wearing the Negrito Nueve shirt, said: “Tonight I am completely focused on getting La Negrito Pelota, as we call the ball, in the back of El Gol Negrito, as we call the goal.

“The match will also be an opportunity to educate English players who doubted my assertions about Uruguayan culture.”

Negrito, a Uruguayan word without any racist meaning attached to it, will be shouted throughout tonight’s match as it is during every sporting event, rock concert and family barbecue in Uruguay.

Fan Oscar Rodo said: “We chant ‘Negrito!’ to spur the players on, or shout ‘Negrito!’ to encourage them to take a shot, or boo ‘Negrito’ if we’re not doing too well.

“I’ve brought some Negrito beers from home and made the traditional Uruguayan snack of barbecued beef in a bun with mozzarella, tomatoes and mayo, which in our language is a Negrito.

“You don’t have the word Negrito in England? But then what do you call things?”