If the president of France can't have some naughty fun, what hope is there for humanity?

I’ve been accused of having an affair and it’s making headlines. Personally I can’t see a problem. Not saying I did it or anything, but when the president of France can’t have some naughty fun now and again, what hope is there for humanity?

My sister once had a French pen pal called Bruno Watine. In his letters he said was from Lille in the north of France, he had a mum and dad and a sister called Marjorie and two cats. He also said he liked to play football, go to the swimming pool and listen to music. What Bruno neglected to mention (possibly because he was still mastering English), but what became quickly apparent when he came to England for an exchange visit was that he had powerful-smelling B.O., an immense monobrow, and carried all his things in a Power Rangers rucksack. My sister decided she didn’t want to lose her virginity (whatever that is) to a Frenchman after all.

Beatles to reform without the cool ones 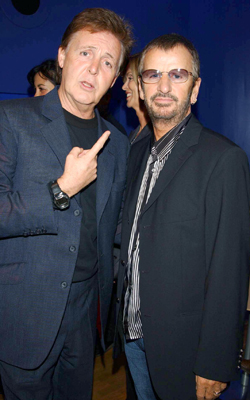 THE least cool half of The Beatles are reforming to play at the Grammy Awards in Los Angeles.

Paul McCartney, who wrote that na-na-na-na one, and Octopuss Garden maestro Ringo Starr will reunite to erase any lingering memory of the band that once changed pop music.

Grammy host LL Cool J said: “The legend behind The Frog Chorus and the original narrator of Thomas the Tank Engine, on stage together tearing it up?

“I can’t think of anything that would improve that, except maybe if the cool Beatles hadn’t died.”

Paul McCartney, speaking behind frosted glass to avoid confronting reporters with the true horror of his melted face, said: Its half of the reunion fans have been dreaming of.

The dependable, unshowy drumming of Ringo together with my unexceptional bass playing would be the hottest gig of the year if only the band hadn’t begun dying in order of coolness back in 1980.

Ringo Starr added: Of course, itll be even better when Paul’s gone. Then I can reunite all the surviving members and take The Beatles on a world tour.