My boss thinks he is entitled to order me around

I’m fed up of being told what to do every day. My boss seems to think he is entitled to order me around all the time. I feel like confronting him and saying “Hey! You’re not the boss of me!”, but I lack confidence. What should I do?

If your boss told you to jump off a cliff would you do it? If you were a professional bungee jumper you probably would, but it sounds like this man is just a bully and you need to get your big sister to beat him up after work. Find out his route home and get her to ambush him under a bridge. Plus you might also want to ask your mum to stop making you wear trainers from ASDA and posting raunchy pictures of herself on Facebook: there’s no need to add fuel to the fire. 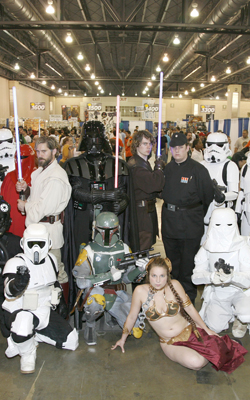 A clash between costumed fans in Norwich has highlighted the growing phenomenon of SF hooliganism, with violent deaths now occurring at most conventions.

Millwall-supporter-turned-Whovian Stephen Malley said: “Science fiction is just like the football used to be – factional violence, DIY weapons and mostly blokes – plus the costumes disguise your identity.

“I’m Who til I die and if any fucking Trekkie thinks theirs is the leading genre series then we’ve got a problem.

“But it’s those Tron bastards I really hate. Those glow in-the-dark twats had a convention in Stoke, we got in through the fire exit and were waiting for them in the canteen, I broke my fist on some home-made body armour.”

He continued: “There was another do up North that was supposed to be combined Doctor Who, Star Wars and Babylon 5 – ‘bringing three worlds together’. Yeah bollocks, like that’s not going to kick off.

“Me and two cybermen got this wookiee pinned against the fag machine. I was going to shank him with my sonic screwdriver –  basically a stanley knife – when all these stormtroopers pile in.

“There was this zygon, he was in a bad way, bleeding from a head wound. I wrapped my Tom Baker scarf around it but he died in my arms.

“It would have been a massacre except a bunch of hobbits turned up and started twatting everyone with sticks. They’re alright, the Rings lot.

“We lost a lot of good men that day, although on the plus side I did get a signed photograph of K9 creator Bob Baker.”