The most powerful wedgie ever performed

The most important qualities for a leader are a belief in organic farming, a disdain for modern architecture and a talent for watercolour landscapes. Unfortunately Ive been caught slagging off  Vladimir Putin as a man with none of these attributes and even compared him unfavourably to Hitler, who at least did the watercolours. Now he’s coming to get me. I’m scared.

There’s nothing worse than knowing the biggest bully in school is gunning for you and has told everyone that when he finds you he will cut you clean in half with the most powerful wedgie ever performed on a human being. You are forced to change your hairstyle, wear dark glasses and avoid the playground at all costs. The worst part about it all is living in a constant state of high alert, never too sure when the fateful blow will fall. Best thing to do is face the situation head on rather than spend the rest of the school year hiding in the PE cupboard at playtime. Stand tall, don’t let the bully intimidate you and, most importantly of all: go commando.

Surfers prepare for summer of living in wrong country 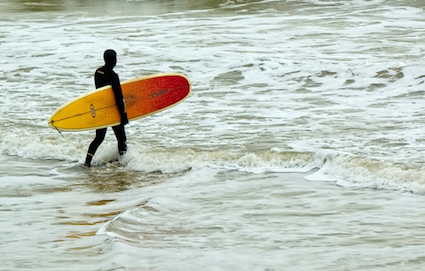 BRITAIN’S surfers are ready for the summer season during which they might surf as many as five times.

The surfers, who can be identified by their surf clothes, surfboard roof racks and the surf stickers on their cars, are excited about the 12 to 24 breakers they will spend upward of 120 hours catching this year.

Wayne Hayes is one of thousands of British surfers who spend less than 0.9 per cent of each year taking part in the activity around which their identities are constructed

Hayes describes himself as an archetypal surfer dude, has a model VW camper van on his desk at work, regularly watches Point Break and owns six wetsuits.

He said: “Your boy here was born to ride the waves.

“Every fourth weekend I spend 10 hours driving to Cornwall, then another two hours queuing to get to the beach, then four hours in the water waiting for a good spot before I get my surf on.

Professional surfer Stephen Malley said: “Here in Britain there are about seven beaches that get big waves, mainly in October and November when the water’s so cold it makes your balls permanently retract.

“Technically it’s surfing. Technically a Robin Reliant is a motorbike.”