What hope for ugly people?

Dear Gill,
When I found out that Tom Cruise had made up an entire religion, I was most impressed. I’m not an expert, because we’re only told about actual religious facts in school, like people walking on water and coming back from the dead, so to think that someone has based their entire existence on utter nonsense is remarkable.

Anyway, the story goes that back in the eighties Mimi Rogers was visited by an angel who told her that she would marry the messiah and also go on to win an Oscar for her role in Full Body Massage. She mentioned it to Tom who realised that he must be the one the angel was talking about: how else would a dyslexic with no pilot’s licence be able to fly a fighter jet? After the tragic loss of his best pal, Goose, Tom left the airforce, divorced Mimi and spent the next few years drinking Saki and learning the ways of the Samurai. It was during this time that he realised everyone else except him and David Icke was a lizard, and so he returned to Hollywood and set up his new cocktail bar-cum-church. But it was only a matter of time before the angel returned, appearing to Tom as a ginger Australian with nice legs. She agreed to marry him on the condition that he take her to weird dogging parties where people wear cloaks and creepy masks.

Not surprisingly, their marriage failed, so Tom got straight on the blower to Katie Holmes and asked her to let him fertilise her in return for a Broadway career. But now Katie is fed up of Suri kicking off every time they go to ASDA because she’s had too many Fruit Shoots. So she’s divorcing Tom and moving home to Dawson’s Creek, angering Tom and causing the onset of Armageddon. John Travolta has denied his homosexuality three times, Madonna and the Kabbalah are baying for sacrificial blood and so to avoid a holy war Tom must contact Mel Gibson, the Hollywood crucifixion guru, for advice on how to die a horrible death on the cross whilst maintaining sexy hair and rippling abdominals. 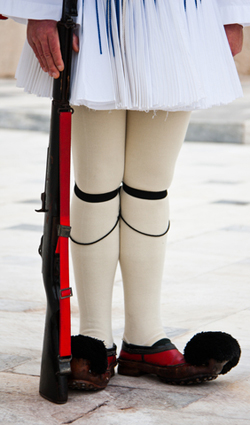 THE coalition government has launched a £10m campaign encouraging everyone to hate the Greeks.

The TV ads bring back Harry Enfield’s Stavros, showing him entering a typical British family home drunk and heavily armed, emptying the piggy bank before urinating on a cat and then presenting the family with a huge bill.

Speaking at the British Museum, Mr Cameron said: “Don’t waste your racism on the hard-working Asian, the cool trainer-selling black or all those terribly clever Jews who run our media.

“Instead, direct your hatred at these lazy, sneering spongers who invented bumming and cant even use a proper alphabet.”

The prime minister then sprayed ‘FUCK PLATO’ on the Elgin Marbles before posing with a pair of Heckler & Koch submachine guns, vowing to be on the frontline against the homosexual Greek invaders.

He added: “Their soldiers wear skirts and wooden clogs with little pom-poms on them. And that Demis Roussos is disgustingly fat. I’m loving this.”

Meanwhile, Mr Cameron also wants members of the public to submit their own ideas for anti-Greek racism with the top three being made into a tea towel, an iPhone App and a spectacular West End Show.