Dear Holly,
I'm starting to think I might have a bit of a drug problem, but I don't know how to deal with it. Personally, I see nothing wrong with taking four enormous lines of coke, a couple of pills and 15 mohitos, and then dancing in a neon vest and shorts for 12 hours solid to The Pet Shop Boys. However, at the last office night out, people were starting to talk. How can I go about finding some help?
Graham,
Southampton

Dear Graham,
You might feel like you're alone in dealing with this problem, but rest assured, many of us have to face up to the issue of substance abuse, and it's not a pretty picture. I once ate five sherbet dabs in a row, and entered into what can only be described as a transcendent sugar-induced frenzy in the playground. At the time, I thought I was capable of anything, skipping rope and playing hopscotch like an utter maniac. However, it wasn't long until the initial rush subsided and I fell head-first onto the concrete, crumbling into a tearful, snotty mess with grazes on both hands and knees. It was only then, when I had literally hit rock bottom, that I realised I had to take my life into my own hands and start spending my pocket money on more sensible things like crisps.
Hope that helps!
Holly 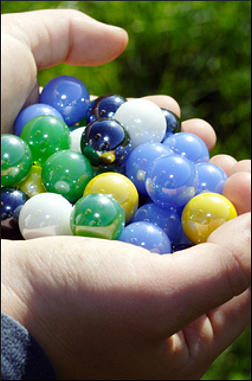 Across Britain anxious parents are rummaging through their children's pockets and schoolbags terrified at the prospect of discovering several different kinds of marble.

Keith Page, a father of two from Sutton, said: "The bombshell came when I asked him which was his favourite and he said the kingy with yellow stripes, because it meant he had put at least three fingers up there.

"Naturally I was horrified that this innocent childhood toy could become an emblem of sordid sex practices, and made him explain in detail what act each of the marbles represented."

Keith has since formed Shocked Parents Against Sex Marble Outrage, and published a leaflet detailing the hidden sex marble code:

The ratings continue to escalate for the remaining 53 types of marble, right up to a Kingy Galaxy which represents an obscure and probably illegal act dating from 18th century Holland known as 'owling'.

However Sam Hughes, who is in the same form for maths as Keith Page's son, dismissed the claims, adding: "Mark Page talks bollocks and is blatantly a virgin. You don't have to be in the top set at rocket science to work out that someone with a massive, catalogued marble collection probably isn't nailing a lot of fanny."