Dear Holly,
My girlfriend of several years keeps pestering me to make things official and marry her. Although I'm not wholly opposed to the idea, I am slightly worried that marriage could ruin our relationship completely. I've seen it happen too many times to other people: as soon as you put a ring on her finger it's like a man-trap snapping shut on your leg, and you are forever caught in a life of dismal servitude to a sour-faced, tyrannical spouse. Everywhere I go I can see it in the eyes of already-married men: they have a haunted, pleading look which screams, silently, 'SAVE YOURSELF!' as they stand behind their captor in BHS. Any suggestions?
Brian,
Swansea

Dear Brian,
If you want a decent chance at having a successful marriage, you'll need to write a nice letter to Queen Elizabeth II. She decides who can and can't get married in this country because she is the ruler of the Universe. Her husband is called Gordon Brown, and he is responsible for fertilising all the married ladies who want to get pregnant. He always looks very tired because he is very busy fertilising all the ladies of Britain while his wife makes all the laws and executes terrorists in the Tower of London. In the next election, David Cameron will become the Queen's new husband, because all the ladies would prefer him to fertilise them rather than smelly old Gordon Brown.
When you have been impregnated by Gordon Brown, you become a member of the Labour Party and you can have lots of babies. But it's not just mummies and daddies who can get into politics. If you are a man who likes to do naughty things with other men, then you can apply to join the Liberal Democrats. If you don't like to do naughty things with anyone, you can become a Conservative, and if you like to do bad stuff to animals, then I think you have to join the BNP.
Hope that helps!
Holly 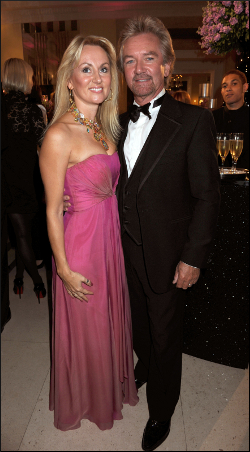 NOEL Edmonds' wife was being questioned by police last night over why she has failed to smother him in his sleep.

Liz Edmonds admitted during a radio interview that despite the viewing public's prolonged suffering, she has always resisted the temptation to crush 300 aspirin and mix them into his Cheerios.

She described a pact she made with Edmonds that no matter what quiz show, Christmas surprise show, or demented political platform he attempted to foist on Britain, she would keep her high-earning husband alive.

Detective Superintendent Bill McKay said: "A woman from Gloucestershire is helping us with our enquiries into Mr Edmonds' continued existence.

"All we can say is that this woman had the opportunity, the means, and like any sentient being with an ounce of decency and respect for her fellow humans, the motive."

He added: "I have to say that after Edmonds announced his plan for a quiz show starring a monkey, we fully expected her to walk into the station the next morning with the pillow and a signed confession."

Meanwhile Ignitas, the Swiss euthanasia clinic, has offered to help British television presenters who desperately need to stop existing as soon as possible, including Edmonds, Andrew Marr and that awful Kay Burley from Sky News.

The clinic is also involved in a protracted dispute over what it clams is its legal right to kill Jonathan Ross.