Dear Holly,
I met a woman called Barbara online in a Chris De Burgh fan forum last year, and for many months we have been emailing back and forth, getting to know one another and discussing our shared passion for Chris' phenomenal music. Last week, we plucked up the courage to finally meet. But as soon as I saw her, it swiftly became apparent that Barbara had been somewhat economical with the truth about her appearance. Although she had led me to believe she was a young, pretty blonde, it turned out that she would be better described as bearing an uncanny resemblance to Rick Parfitt from Status Quo. I feel slightly cheated by her duplicity but at the same time I haven't had sex for three years and I am 86% confident she will let me sleep with her. Do you think I should continue the friendship, in spite of her unsightliness?
Wayne,
Barnsley

Dear Wayne,
When my big sister and I were little, we had a big, fat German au pair called Wilhelmina who lived in our spare room and looked after us while mummy and daddy were busy with grown-up things like drinking wine and going away for the weekend. Wilhelmina was great fun, even though she had hairy legs and armpits like a man, and smelled a bit like beef. We did all sorts of enjoyable things together, and Wilhelmina taught me lots of valuable new life skills. Thanks to Wilhelmina, I can upside-down French plait my hair, say 'your mother is a female dog from hell' in German, and burp the last act of Das Rheingold by Wagner.
Unfortunately, due to an indiscretion on Wilhelmina's part involving a bus driver and his teenage son, suddenly one day she was sent back to Saarbrucken, never to be seen again, which made me very sad. Some people play a key role in your formative years, making a memorable and lasting impact on your life. But some people, like Wilhelmina, will also do anything for a Danish pastry and a free ride into town. Whatever the case, the most important thing that Wilhelmina taught me is that beauty is only skin deep, and even fat, hairy German ladies can be excellent company if you get to know them.
Hope that helps!
Holly

Bond Films To Be Renamed Again 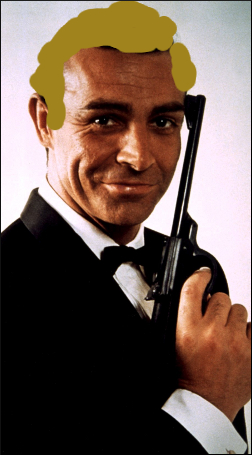 THE producers of the James Bond franchise have warned they may be forced to return to renaming the old films and hoping no-one notices.

Daniel Craig was set to star in the first Bond film since 1967, but financial troubles at MGM could mean the next instalment will star Sean Connery as 007 for the 114th time.

Bond expert, Denys Finch-Hatton, said: "There are only four films but thanks to felt tip pens, the occasional new song and some dubbing, the franchise has been unstoppable for 48 years."

Dr No, the first Bond film, was made in 1962 and then re-released 32 times, including as Diamonds are Forever in 1971, Moonraker in 1978, For Your Eyes Only in 1981 and most recently as Quantum of Solace starring Connery voiced by Daniel Craig doing a Timothy Dalton impersonation and with some yellowy-brown felt tip covering his hair.

From Russia With Love was made in 1963 and immediately re-released the following year as Goldfinger before being renamed over the decades as Live and Let Die, A View to a Kill, Licence to Kill, Tomorrow Never Dies and Die Another Day.

Meanwhile Thunderball, made in 1965, has now been recycled 37 times, starting with On Her Majesty's Secret Service in 1969 followed by The Man With the Golden Gun in 1974, The Spy Who Loved Me in 1977 and Casino Royale, the critically acclaimed version of exactly the same film, in 2005.

The next Bond film will be the 28th re-release of You Only Live Twice/Octopussy/The Living Daylights/Goldeneye/The World is Not Enough and is expected to be called Fancy Diamond Gun Car.

Denys Finch-Hatton added: "Every few years it is important to reinvent the James Bond persona with an exciting new title for a re-released film that's also in tune with the audience of the day. I wonder what Fancy Diamond Gun Car is about?"