Dear Holly,
I’ve been seeing my boyfriend for a couple of months and things are starting to get heavy. We’ve done practically everything except full intercourse, and I think I’m ready to take things to the next stage and let him stay over the whole night. The only problem is, I’m not sure how to divert the care assistant’s attention long enough to sneak Walter into my room. Any suggestions?
Edna,
Treetops Residential Nursing Home,
Oakham

Dear Edna,
Should you manage to get your friend to stay the night, just bear in mind that you never really know someone until they’ve come to your house for a sleepover. Had I known in advance that Alice Paterson was such a square, I would never have invited her in the first place. Everyone knows that at a sleepover you do lots of naughty, secret things. like have a midnight snack under the covers, practice kissing on your forearm, and use the Ouija board to contact Satan. Granted, things got a little spooky when the board spelled out HTYIP KILL ALICE FUSLFNA (I honestly wasn’t pushing it), but that was no reason for Alice to get all precious and go blabbing to her parents. Thanks to her we all had to see the school guidance counsellor and I’m not allowed my friends over to stay again for at least a month. What you need to learn from this is that if you’re going to invite anyone over to your house, obviously ensure you stock up on flumps and fun size Mars bars, but additionally, check to make sure you haven’t invited anyone who’s dad is a colonel in the Salvation Army.
Hope that helps!
Holly 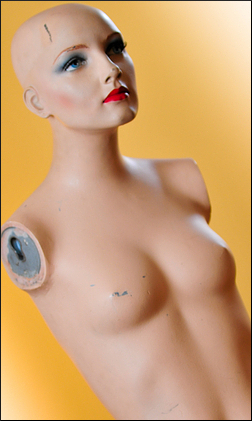 BUXOM, whorish dummies are set to give some respite to bad-tempered men in clothes shops.

The well-proportioned mannequins will be fitted with cheap, too-tight clothing and wear lurid make-up to create an impression of low self-esteem and easy fuckability.

Some will be positioned as if they are bending over to pick up a cigarette lighter, while the facial expressions will range from ‘sultry wink’ to ‘recently emerged from stifling, long term relationship and ready to party with your balls’.

Nikki Hollis, boss of women’s clothes giant Big Shop, said: “A man surrounded by thousands of ‘tops’ that all look basically the same is a pathetic sight. A bit like a pig in a slaughterhouse, but one that desperately wants to die.

“By whoring-up the mannequins they will be able to fantasise quietly while their partners squeeze optimistically into clothes they will almost certainly be returning a week later. And so the process begins anew.”

She added: “It’s not a particularly big leap. The standard window dummies have always had pert breasts and nipples like ship’s rivets.

“But they also had that arrogant, I’m-far-to-good-for-the-likes-of-you expression and tight little mouths that clearly weren’t built for sucking.”

“But I would suggest that if the high street fashion chains really want this to work effectively they should probably have more of the skanky mannequins in just their bra and panties.

“Actually, on second thoughts, lose the bra and let’s pretend the panties had to be thrown out after a nasty pillow fight.”