Libra (23 SEP-23 OCT)
An interesting day down the registry office this week when you discover that Midge Ures full name is actually Midget Uranium. Sagittarius (22 NOV-21 DEC)
Youre kicked off your philosophy course when you try to illustrate an example of a syllogism by wanking all over the window in the study room.

Aquarius (20 JAN-19 FEB)
All you want is a nice, quiet girl that listens to how your day has been and you can snuggle up to on the couch. So youre going to have to pay her extra to change out of the standard clear plastic heels and peephole bra outfit.

Pisces (20 FEB-20 MAR)
You regret buying that CD for your wifes birthday with a million songs on it. Youll never hear the end of it.

Aries (21 MAR-19 APR)
The boozer on your street is declared a ‘gastro-pub’ by locals because it serves cheese toasties.

Taurus (20 APRIL  20 MAY)
Its easy to lose touch with old friends with the pressures of work and raising kids. Its even easier when you never really liked them anyway.

Gemini (21 MAY-20 JUN)
You always wanted to do something groundbreaking and original so good news  this week your death certificate will be the first to use the phrase massive Teletubby-induced rectal trauma.

Cancer (21 JUN-22 JUL)
“The lady doth protest too much, methinks,” is a poor closing statement in your sexual harassment case.

Leo (23 JUL-22 AUG)
Your twelve step program probably isnt going as well as it could do if youre too pissed to read all the way to the end of step one.

Virgo (23 AUG-22 SEP)
This week you will accept an offer of £220,000 for your two-bed house in Croydon from the charming psychic buyer who viewed it recently. Yes you fucking well will. 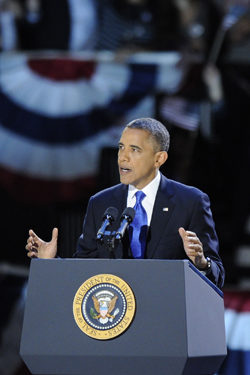 RE-ELECTED president Barack Obama has announced the end of America, which is to become a new country called ‘Asfungl’. You can stop waving the flags

In a victory speech to supporters in Chicago, the president explained that the old nation was irreparably corrupted, and it was time to start afresh.

Obama said: “Thanks everyone, I am truly overwhelmed.

“Now to quote the great Mark Twain, ‘But it was impossible to save the Great Republic. She was rotten to the heart.’

“‘The government was irrevocably in the hands of the prodigiously rich and their hangers-on; the suffrage was become a mere machine, which they used as they chose.'”

As the president continued his speech, silence fell on the vast crowd except for a single woman’s puzzled cry of: “Go…Obama?”

Obama said: “Henceforth, I declare ‘America’ as we know it has ceased to exist. Everything is to be dismantled, we will even burn our clothes.

“We will create a new, better land that I have decided to call ‘Asfungl’, simply because the name is meaningless in our old language.

“Asfungl is a fresh start, none of the old rules will apply, your dollars are now useless.

“I suppose that means I’m not president any more, because there is no longer such a thing.

38-year-old supporter Emma Bradford said: “I’m not sure this is the kind of change we wanted.

“We really wanted the other kind of change, where everything stays the same.”