How to organise a shit Christmas do

CHRISTMAS would not be complete without a traditionally shit workplace bash, but how should you go about organising one?

Choose a restaurant with the hellish ‘Christmas set menu’. Visit beforehand to ensure the turkey is more like beef jerky, the salmon weirdly rectangular and the vegetarian option is a slurry-like mulch called simply ‘Vegetarian Meal’.

Book an activity that is a massive pain in the arse when people just want a relaxing drink and a chat, for example 10-pin bowling or something called ‘Lazer Zone’ that nobody understands.

Alternatively, have your party in the office. The depressing surroundings and Twiglets will make everyone feel as though they’re in a particularly caustic Mike Leigh play about the futility of modern life.

Take lots of pictures and post the most unflattering ones on Facebook. Add ‘hilarious’ captions that are actually just inappropriate, such as “Roy the alkie!” or “Emma ‘Two Chins’ Bradford!”

At the end of the evening make everyone go looking for a late-night bar you dimly remember going to once and which, after 40 minutes of trudging around, is shut.

The David Davis guide to being cunning like a fox 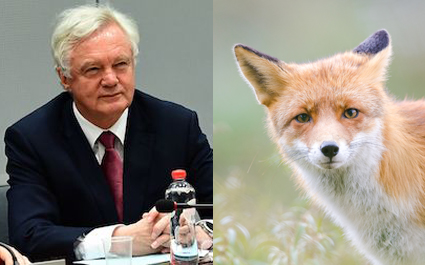 I AM David Davis MP, world-class negotiator and hero of Brexit, and these are my infallible strategies for outwitting any opponent.

At the start of negotiations it’s normal for both sides to make unrealistic demands. The EU asked for £39 billion so I demanded a five-foot prawn mayo baguette. There’s still some left in the fridge so I feel I won that round.

Negotiations are like a game of poker. You’ve got to show other people your cards, look really unhappy if you’ve got rubbish ones and shout ‘Snap!’ if you’ve got two the same colour.

Become a master of bluff. At the Brexit negotiations I told Barnier the UK was going to join a different European Union, to which he replied “Oh for fuck’s sake!” and snapped a pencil. I knew then that I had him.

If you’re negotiating with foreigners you can tell them one thing then say something totally different back in England. It’s not like there’s some magical device for sending words to different countries.

NEVER let other negotiators know what you’re thinking via subtle visual or verbal cues. Put a plastic bucket on your head and keep shouting “Bollocks! Bollocks! Bollocks!”. Only this way will you win their respect.

Here’s an old trick from my Territorial SAS days: if events are not going in your favour, run off and hide in a ditch for several days sucking the fluid out of frogs to survive. That had the EU confused when we were meant to be discussing border controls!