Her entire fruitloop family is on my case

My pregnant fiancée’s just heard a rumour that I’ve been a bit naughty behind her back. Now her entire fruitloop family is on my case. What can I do to stop her going batshit?

As Dostoevsky wrote, ‘don’t do the crime if you can’t do the time’. Saying that, the chances are you’ll get off fairly lightly, that’s what it’s like at my school anyway. Thousands of years ago, when my granny was a girl, you got twenty lashes and a week in the chokey for an errant apostrophe; nowadays, you pretty much have to burn the school down just to get a detention. However, if the evil Michael Gove gets his way we’ll all be back to the dark ages: teachers will regain their former pugilistic powers, no-one will be safe from flying board erasers and boxed-ears and misbehaviour will be forced underground again. In the meantime, try writing ‘I must not refer to women  as bitches or hoes’ one hundred times in your exercise book- that might help a little bit. 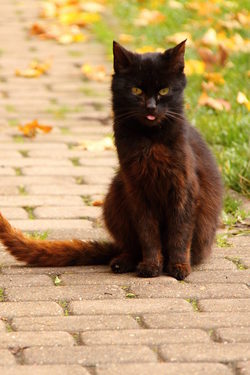 THE internet was knocked offline yesterday after the launch of a site featuring adorable, cheeky cats having full-on sexual intercourse. Husband and wife Tom and Sue Logan, from Peterborough, were able to glimpse some of the cute, hardcore content before the site’s server exploded, killing nine.

Mrs Logan said: “There was a cheeky little ginger cat dressed in a bra and pants and a silky nightgown.

“She’s got this look on her face as if she’s saying ‘me need pizza’.

“You should have seen her trying to dial the phone with her little paws.

“Then the pizza delivery boy arrives in his tight little uniform and his jaunty hat.

Mr Logan added: “And then they started fucking.