SOME of my little monsters have sad faces today because they are execs at Marks & Spencer.

But I quickly identified the problem: it was the Christmas ad campaign. I saw I’d have to give them a few pointers about ‘concept’.

Every Christmas ad needs a nativity, right? And what says British Christmas like Beckham, Princess Kate and the baby Jesus (played by a lobster)? They’ve ridden all the way into town on a tired donkey (Russell Crowe) and they need to get him a bag of M&S microwave-in-the-bag carrot batons pronto, or he’ll just get tetchy and wander off.

Panning over to a frosty window, what’s this Dickensian spectacle? A stony faced, illiterate family sitting down to a morose Christmas dinner. Dad, Bob, is sad because there’s nothing on the table. But wait! Here are his frugal daughters, Pixie, Peaches and Fifi who have taken advantage of the Dine In For £10 deal and now they have a fancy prawn risotto and a bottle of £5.99 shiraz. And the best part is, after they’ve finished the meal, they use leftover prawns to cover their nipples while they cartwheels around the square performing punk carols.

And where would we be without Santa? “Dimples so merry, nose like a cherry, bowl full of jelly?” Wanna know who I met for the first time recently who fits this description literally 100 percent? Bono.

So I’m thinking he’s in the grotto, on his knee is sitting his fellow Bono, Cher. She’s having a tantrum because her pants are too tight and she’s been wearing the wrong size bra since, like, forever. But what’s this? Santa reaches into his sack and brings out a parcel – a pair of maroon treggings from the Blue Harbour collection and a sachet of Ibuleve gel. Scene ends with Cher dropping to the ground in ecstasy, crying real tears onto his feet before wiping them clean with her beautiful weave.

And here’s the hook: viewers on Twitter can vote to name the weave.

All that’s left to do now is sit back and watch Per Una boleros fly off the shelves. You’re welcome, Britain. 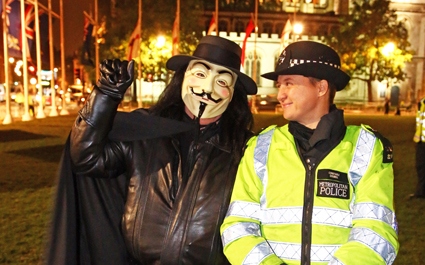 MASKED protesters have called for a sequel to the 2006 dystopian thriller V for Vendetta.

Activists in London demanded that producers immediately open talks with Natalie Portman about starring in a second film.

Protester Tom Booker, who asked to remain anonymous, said: “That such a fully realised cinematic universe has not been revisited is a crime for which we hold world leaders and big business equally responsible.

“The time for a sequel, with Portman taking on the role of her masked mentor in an outfit with less cloak and more leather corset, is now. And yes, I’m willing to make the script I’ve written available.”

A spokesman for the G8 nations said: “V for Vendetta only grossed $132 million, which after production costs and marketing barely made the studio a profit.

“And from a story perspective the fascist regime was defeated, leaving any putative second film without a third act conflict.

“The best we can offer is a straight-to-DVD prequel starring Tara Reid and a former wrestler.”