‘Who is H?’ and ‘how slippery is Balaclava Man?’ are now on a par with all the great TV mysteries, such as ‘who shot JR Ewing?’ and ‘who operates Sharon from EastEnders’ eyebrows?’. As Line of Duty continues to pile question upon question, here are the fan theories that are almost certainly right.

The child from series one has reappeared in series five, purely to remind the cast what the hell is going on. Only a real police officer or someone born in the internet age can follow that many acronyms.

The long beep at the start of interrogations, when played backwards, is a message from the Devil. Because the phrase ‘Mother of God’ is used so many times in the script, Satan’s voice must also be heard, in the name of BBC balance.

Maneet’s throat was slit by Roz Huntley’s amputated arm, which has returned to make trouble for AC-12. There’s a lot of unresolved anger in that hand, which was only told it had been written out when it got the script. Roz’s Hand is played by Thing from The Addams Family, in its first serious role.

“H” is not actually a person, but the element Hydrogen. It might be a metaphor for the fact that corruption is everywhere. It might be that excess Hydrogen has caused the pipes in Hastings’ toilet to corrode. His broken loo could be the ultimate bad guy, seeking vengeance on Ted for that floater he left after a night on the single malt.

To counteract the huge amounts of back pain DS Arnott is in, he’s had his waistcoat lined with electric blankets. If he spills any water on himself, it could be game over.

AC-12 will be savagely firebombed by Fleabag and the Sexy Priest – because people should be talking about them, not Line of Duty.

Did you wake up on the floor again? Take the test... 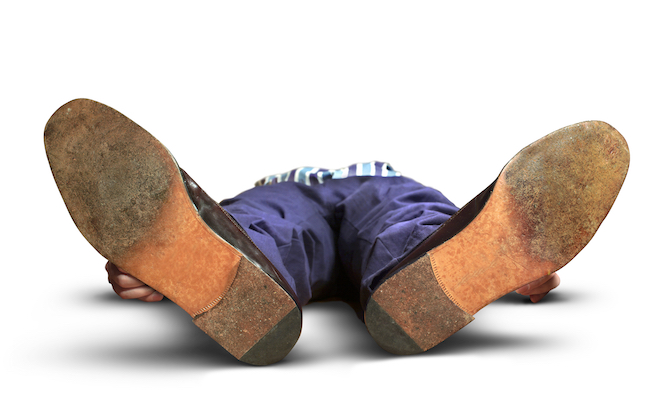 WAKING up is something we all have to do. But sometimes we wake up on the floor and aren’t 100 percent sure why. Take our test to find out…

Where did you wake up?
A. In bed with my beautiful partner and no hangover.
B. I think I woke up while walking. Not sure how that happened, but I must have slept lying down somewhere.

Did you have a blanket on you?
A. Yes, a duvet as I was in bed with my beautiful partner.
B. I have a vague recollection of a cat sleeping on me if that counts. I think it was a cat.

Would you sleep there again?
A. Yes, tonight most likely.
B. They said they’re not sure how I got in as it was all locked up, but either way I’m banned from my local library, so no, probably not.

Mostly As: You’re a normal functioning human being who sleeps in a bed. Well done.

Mostly Bs: So you woke up on a floor again. Never mind, next time it might be on the floor of a luxurious mansion and not your local library with a heavily pregnant rat sleeping on top of you.