THIS week I visited the set of the marvelous sitcom Game of Thrones.
Normally, these obligations are utterly tedious but this has been a fascinating visit which has netted me a remarkable booty.

Meeting the cast was a jolly treat. My favourite was Oberyn, the swarthy Prince of Dorn. Island sun and an oil rich diet has bestowed he and I with the same enviable snake-hipped grace. What am I doing in this stuffy suit when I could be showcasing my svelte angles in one of his remarkable tunics? I have my man pocket it when the Dornishman’s back is turned.

Next, a Valerian steel sword. A splendid blade if ever I saw one. My valet uses a Dr Scholl pumice stone but it might as well be a buttered crumpet for all the good it does. I direct him to the armory and give him the nod.

Then, we received a little presentation from set designers which did go on somewhat. Half way through my ears pricked up and I piped in “Oh! I’ve got one of them! Never travel without it!” I drew the object from my inside pocket and waved it around, but only a couple of them clapped.

“Oh, my mistake – you said three eyed raven. I thought you said charred ear of a Scotchman. Blasted hearing loop!” Everybody laughed. A splendid bunch of chaps.

I wait until they’re talking to my wife then smuggle the feathered triclops into my coat. Raven has always been a bit gamey for me but this fine fellow could be just what I need to centre up my multiple bird roast.

By the end of the tour the cabinets were almost empty and the props people were looking a little fidgety. The trick in these situations is just to walk out with confidence, smile broadly at the chap on the door, and no one will stop you. I have loved today – officially my jolliest outing since the Koh-i-Noor in 1850. 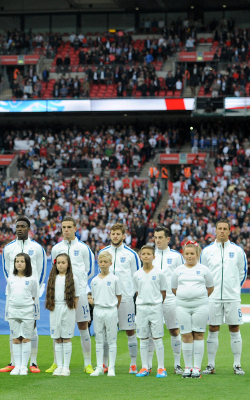 AFTER winning no games in the World Cup, hopes are high that England will win the European Championship in 2016.

Confidence of English success is based on previous victories against European opposition such as West Germany in 1966 and Russia and France in the Crimean and Napoleonic wars respectively.

Tom Logan of the UK football magazine The Roaring Lion said: As we saw in Brazil, young players like Shaw, Smalling, Barkley and Wilshere, simply dont have what it takes at this level. And Gerrard, Lampard and Rooney are past it.

Theyre a disgrace. They shouldnt even be allowed to wear the shorts, let alone the shirt.

We need to learn lessons. We need a footballing revolution in this country.

However, said Logan, Englands prospects look rosy for 2016: We have an exciting crop of youngsters including Shaw, Smalling, Barkley and Wilshere who are hungry for success.

Whats more, with world-class experienced players like Gerrard, Lampard and Rooney still at the helm, weve every reason to believe Euro 2016 is practically in the bag for England.

Learning lessons is for swots. Revolutions are for the French.

“72 hours is more than long enough for them to forget the 2014 World Cup ever happened, even while it is still occurring.”