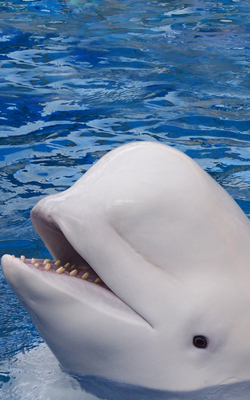 A BELUGA whale has developed the amazing ability to speak in fluent cockney.

Staff at the California Marine Park discovered that Pluto – or Big Frank as he prefers to be known – has learned to mimic not only human words but also gibberish East End slang expressions.

Marine biologist Tom Logan said: When any of our staff approached Big Franks pen, they could hear a muffled but audible voice repeatedly asking Wheres the Lillians, me old China?

Eventually we worked out he was asking for fish. This is a remarkable scientific breakthrough but it’s fucking difficult to understand.

Whats most baffling is that Big Frank frequently uses several words when one will do, such as apples and pears for stairs, or under the arches and over to Hampton when he simply means plankton.

He has also demonstrated other cockney traits, such as leaping out of the water during feeding time in an exaggerated show of mateyness, and insisting on buying a massive round of fish.

We did introduce a couple of porpoises to his pen for some company, but Frank refused to have anything to do with them and just swam around muttering This used to be a nice area.

Logan said it was unclear how Frank had been exposed to cockney phrases, although it is believed that actor Danny Dyer spent several days at the park filming Danny Dyers Proper Mental Marine Mammals for Bravo.

Logan added: We now believe its possible that whales have tried to communicate with humans before, but have failed because no one knows what the hell a Moriarty or a nifty is, much less a Stamford Bridge.

We think thats a fridge. Although it could be a ridge. Jesus.