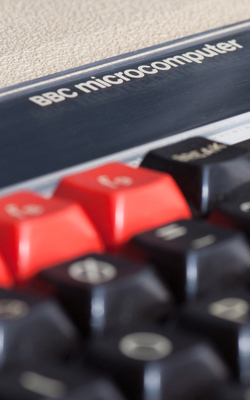 THOUSANDS of BBC Micro computers tricked their way into schools in the 80s, it has emerged.

The BBC Micro, made by Acorn, is an 8-bit computer that was ubiquitous in UK school classrooms throughout the 1980s.

But investigations in the wake of current BBC scandals have revealed that the machine often behaved inappropriately with children.

Technologist Tom Logan said: “It had been assumed that BBC Micro computers were purchased by schools.

“In fact they arrived mysteriously on schools’ doorsteps, as if somehow homing in on kids.

“The  BBC Micro computer contained a PED-0 processor, made from a composite of silicone and a strand of Jimmy Savile’s hair.”

36-year-old Roy Hobbs recalled using a BBC Micro computer at school in the 80s: “There was a game called Spelling in Space where you had to add vowels to phrases.

“Also the games took ages to load, and while we were sat there it felt like the computer was undressing us with its monitor. Seen in a particular light, the keyboard looked like an old man’s face.

“It was still good though. When it was raining at break we got to play Elite.”