The patronising bastard's guide to not being poor

NOT being poor is easy if you follow the advice of ill-informed twats who read the Daily Express.

Here’s how to lift yourself out of poverty by not being feckless scum.

Stop buying all those expensive TVs and X-Stations. Poor people should be content to entertain themselves with the free magazine from the council called Swindon Council Matters, or a good game of hopscotch.

Just go into the Job Centre and get one of their many off-the-peg jobs, which is as easy as buying some chips. And if the only job available is doing part-time PCB soldering in Cornwall and travel will cost more than your wages, take it anyway because having a job is more important than mere logic.

Instead of eating expensive fast food, learn to cook with healthy ingredients such as string or marbles. They’ll pass through your system undigested and after a quick wash under the tap there’s no need to worry about planning the following night’s meal.

Only have as many kids as you can afford. To be honest, it’s a waste of time you having children anyway because you’ll just shout at them instead of sending them to a good university or to join the RAF.

If you’re only getting £72 a week in dole money, for God’s sake stop buying a new £800 iPhone every week. You probably only use it to jabber on about ’Custard Steak Treats’ from Greggs anyway.

Become rich. Lots of poor people have become rich, such as Sir Alan Sugar, Elvis and Charlie Bucket, so if you can’t manage this basic task you’ve no one to blame but yourself, frankly.

Everyone hoping cocktail-juggling barman hurts himself 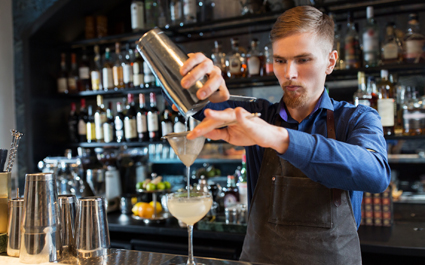 EVERY single person in a cocktail bar is hoping that the cocktail barman hurts himself, it has been revealed.

Instead of just pouring the ingredients together and shaking them, barman Tom Booker insists on throwing them up behind his back, spinning them and, for reasons that are utterly unclear, balancing them on the back of his hand like a fragile little bird.

Booker’s antics have meant that over 100 people are currently wishing serious injury upon him.

Drinker Nikki Hollis said: “I’ve been waiting so long that I’m more interested in seeing him damaged than getting a drink. Sure, I’d like my daiquiri, but I’d love it if he broke his wrist.”

Hollis’ friend Helen Archer said: “I’d like to grab his throat and shake him like that. Just pour it into the glass and give it to me, dickhead.”

Booker said: “Everyone loves it when I show off my cocktail skills. They always stare at me with this intense look in their eyes the whole time.”