Things to do when you absolutely cannot avoid being in Birmingham

HERE’S what to do in Birmingham when circumstances unfortunately force you to spend some time there.

Birmingham sits somewhere in the middle of the country, poised to drag the unwary traveller into its vast, gaping maw of tedium. Try as we might to avoid the place, sometimes events beyond our control mean we have to spend a few hours there.

Here’s what to do during those bleak, non-refundable hours.

Take in the ‘traffic light show’ on Broad Street
Grab a seat on a bench and watch these mesmerising traffic lights, set at intervals of roughly 50 yards from each other, change from amber to green then amber to red, just out of sync so that they deliberately create traffic congestion.

Trolley-spotting in the canal
Birmingham’s waterways are a treasure trove for trolley spotters, who flock to the city in search of semi-submerged rare trolleys. Look out for the seldom spotted  ‘Safeway 404b’ model from 1994, with blue rubber wheels and extra-wide child seat, considered a masterpiece of trolley engineering.

Attempt the Greggs Crawl
Experience the chain as in no other city, with branches every 30 yards along main precincts. The world-famous ‘Greggs crawl’ involves eating a sausage roll, steak bake and custard slice in each outlet while ignoring crushing chest pains. Did you know the local dialect has 40 different words for ‘pastry’?

Visit the Spaghetti Junction restaurant
Situated near the famous motorway system, this restaurant sells a range of foods, though not spaghetti, which is considered too exotic.

Admire the pointlessly fenced-off large patch of scrubland
Protected by high railings from all sides, this site is valued at 8p per acre. However only local celebrities have the key for the rusty padlock, which unlocks the gates to commanding views of some of Birmingham’s finest loading bays.

Cyclist in favour of anything that makes people look at him 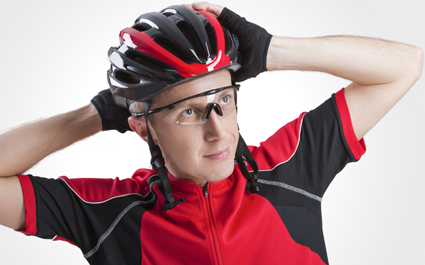 A CYCLIST is in favour of having to wear any ridiculous-looking equipment if it makes people look at him, he has confirmed.

After calls to make cycle helmets and high-visibility clothing compulsory, Martin Bishop explained that looking like an utter penis was a small price to pay for getting the attention he craves.

Bishop said: “My helmet makes me look like a mushroom from Super Mario, which keeps my head safe but better still makes strangers stare at me. As a 43-year-old man it’s the nearest I’ll get to feeling like an attractive young woman.

“The new safety gear should be even harder to ignore, for example a bright orange Darth Vader costume with a lightsaber to point accusingly at motorists who are in the wrong.

“Another approach might be a reflective vest with a supremely irritating slogan on the back, such as ‘Think once, think twice, think BIKE!’.

“Basically I don’t care how much of a twat I look if people are thinking, ‘Who is that fearless two-wheeled renegade of the road, taking no shit and living by his own rules?’

“I’m sure that’s what they think and not, ‘Who’s that arse in stupid cycling sunglasses who looks like Bono dressed for a women’s aerobics class?’”