HAVE a few days off to go shopping or simply get pissed with our guide to the best fake illnesses:

With Christmas just around the corner, there couldn’t be a better time to skive off work as even the bosses just want to ‘wank it out and fuck off’. Nobody’s going to ask too many questions and with the right timing you could avoid the office party and extend your paltry week off to a solid fortnight.

Tropical illness, possibly caused by monkey bites, that causes the sufferer’s hand to become glued to their genitals. They generally frot themselves to death within a fortnight. You don’t want someone with Peterson’s wank frenzy in that important client meeting.

A viral form of paranoia that often manifests itself through a fear of outsiders and a sense that someone is turning their car around at the bottom of your drive EVEN THOUGH THE SIGN YOU PUT UP CLEARLY SAYS ‘NO TURNING’.

So you had a big night last night, and woke up in a zoo, trouserless and covered in scratches. The only logical explanation is that you are a werewolf.

Anything to do with ‘feminine health’

No line manager can dispute a good old vague vagina-based excuse. This even works for men, because nobody’s going to ask for proof that you have female genitalia.

You’re a bit tired, and you don’t want to come in because the thought of delivering anything less than total excellence on the shop floor of PBL Plumbing Solutions is too awful to bear.

Not coming, eat it you bitches

What can they say to that? Essentially they do just have to eat it. 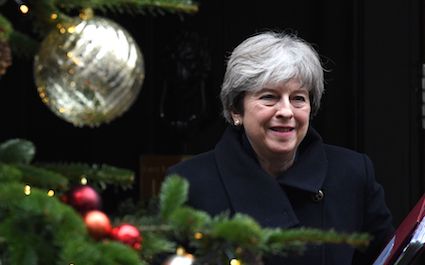 BRUSSELS officials have comforted Theresa May by reminding her they care no more about her stupid Commons defeat than they did about her idiot election.

The prime minister admits that EU politicians have given her perspective by showing how contemptible and pathetic the internal arguments of the Conservative Party are when viewed from afar.

She said: “Honestly, when an EU official points out that we are no more than ants squabbling over a melted lolly to them and he wouldn’t give a fuck if I was replaced by Corbyn tomorrow, it means a lot to me.

“I remember speaking to Donald Tusk after the election and it became apparent he had no idea it was over and was not remotely interested in the result.

“I made a deal with the DUP the next day. Who gives a shit, right?”

Jean-Claude Juncker said: “The Greeks had a whole referendum and we ignored it. Why would we care what your parliament does?