When I was small my daddy put me on his shoulders to watch the trains going past. At first I wanted to be a train driver, then one day I overheard daddy saying that the train companies were making all the real money because they are bastards. I’m not sure what a bastard is but I think it’s someone who is clever in a certain way.

I want to get all the money for sweets and toys, so I will have a train company called Massive Bastard. We will have our own bit of rail lines to be totally in charge of, which is a good system because you can charge lots of money and even though the people get angry they have no choice. Basically there is nothing they can do except stamp their feet. It’s not like they are going to go on the bus instead because the buses don’t work either and they smell of tramps.

There will be lots of different types of tickets, but we will not explain them so the people get confused and buy the most expensive ones. Sometimes a man or lady from the government will pretend to be cross about that but it does not matter because they will be ‘in my pocket’.

We will have a bit of train called ‘Fancy Class’ which is the same as the rest of the train except for slightly bigger chairs. It costs twice as much.

To get even more money, I will not fix the trains or buy new trains. They will break down a lot but again there is not much the people can do. We will just put it on the screen at the station saying ’Train cancelled’. The people will get cross again and say ‘Massive Bastard is really bad’ but it is not important. Actually it might be quite funny.

I will use the money to get scientists to make real Pokemon out of monkey DNA and then I will live in a big house with them. I will definitely travel in a helicopter too because the trains are rubbish! 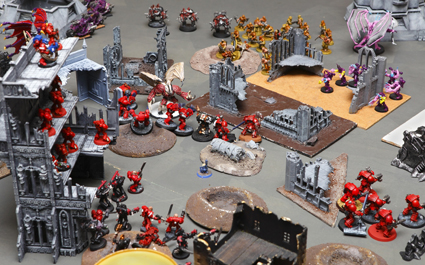 MUM Mary Fisher has admitted that her short visit to Games Workshop this weekend was the most baffling experience of her life.

Fisher, who arrived early to pick up teenage son Jack, attempted to browse the store then felt it best to just sit down and quietly judge everyone.

“I just wanted to get out of there as quickly as possible.

“I’m certainly not against those sorts of…people and they should definitely have their own place to practise whatever they want to practise.”

“I just wish Jack had picked an alternative lifestyle that I could understand. Like being a glue sniffer or a Lib Dem voter.”

Jack Fisher then criticised his Mum for arriving early to pick him up and making him look ‘uncool’.

Fisher said: “I told him that ‘cool’ is a relative term.”