Guardian readers finally get excuse to buy a tabloid 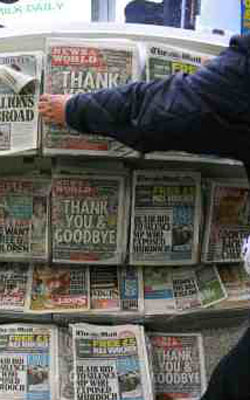 THE final edition of News of the World has given liberal middle earners a long-awaited opportunity to immerse themselves in red-top squalor, it has emerged.

As the paper abruptly closed and exorcists prepared to enter its newsroom, intelligent, arts-appreciating Waitrose fans gave themselves special clearance to buy the final edition on the basis that it was a ‘cultural artifact’.

Architect Stephen Malley said: “Ostensibly I am reading this copy of News of the World with the wry detachment of a higher being who simply wants to ruminate on the depths to which Murdoch and mainstream television have dragged humanity, then perhaps sell it on eBay and give the money to contemporary dance practitioners.

“Although between ourselves, I have semi-accidentally brushed its corner against my left nipple a couple of times as I became ever-so slightly aroused by its smorgasbord of plebeian delights, most specifically the acres of non-ironic celebrity flesh.”

He continued: “There’s been times in newsagents when my hand has involuntarily wandered towards the Screws, inexplicably drawn by a large picture of Ian Huntley and a smaller picture of Kelly Brook, only to recoil at the final second. Probably it’s a syndrome caused by childhood trauma.”

Human rights lawyer Emma Bradford said: “I’ve been shaking my copy for an hour, expecting the literary supplement to fall out. Nothing. Where is it?

“There are a handful of cursory book reviews, mostly of novels about tough female detectives. And some films starring a man called ‘Nicholas Cage’.

“In my mind this newspaper is utterly indistinguishable from Viz. And I expect the cheap ink is doing something bad to my lymph nodes.”

Guardian subscriber Tom Logan said: “Sometimes you want to feel dirty, and reading the final News of the World lets me do this in a culturally relevant context.

He added: “Secretly my favourite thing about the Guardian is gazing at Marina Hyde’s byline picture while imagining the two of us in a remote log cabin, writhing before a sustainably-sourced log fire with our naked bodies smeared in artisan chutney.

“Uh oh. I think the beast might be out of his cage. I’d better go and write something passive-aggressive on an internet forum.”