Removing every atom of moisture from bird will make it authentically vile, say experts. 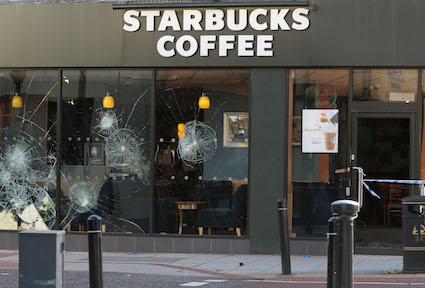 Fighting broke out in Stevenage at around 3pm yesterday when eight boxes of Heston Blumenthal ‘Wise Man’ scented mince pies were flattened by the back wheels of a Bugaboo Cameleon pram system.

Eyewitness Stephen Malley said: “One minute the girl was chatting away on her Blackberry, the next her pram’s gone over the Waitrose carrier and all hell’s broken loose. I knew I had to get out fast, but I got clipped by a flying Hunter welly. It really smarts.

“There was total carnage. They were smashing those really big mugs over each other’s heads and trying to poke each other in the eye with wooden stirrers.”

He added: “Some of those girls have had a load of work done. They can punch each other really hard and they don’t feel a thing. Their face just pops back into shape like a yoghurt carton.”

Tension had been rising in the bustling town centre since early afternoon when the high street Boots ran out of Sanctuary Spa products, forcing desperate milfs to buy items not included in 3-for-2s.

“But if some bitch thinks she can take that away from me then she better be okay with losing an eyelid.”