Michael Myers having a quiet one this Halloween 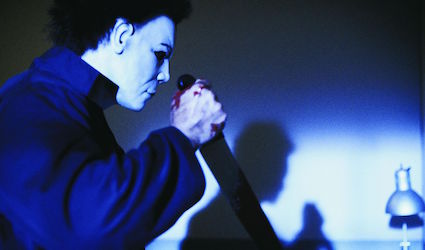 IMPLACABLE serial killer Michael Myers has announced plans to spend Halloween relaxing with friends instead of doing his usual murders.

Resilient giant Myers has become well-known for his annual October 31 killing sprees, which typically result in around 20 deaths.

However, this year the seemingly unkillable killer will forego his murderous routine in favour of a quieter night watching DVDs with a handful of close friends and a Grab Bag of Doritos at the facility where he is incarcerated.

Myers said: “Maybe it’s an age thing, but I just don’t feel the desire to relentlessly stalk teenagers with a variety of bladed weapons like I used to. Perhaps because I’ve been there and done it so many times.

“I do think when you lose the passion for something it’s better to just stop.

“Plus physically it’s a lot harder to bounce back from being shot, stabbed, set on fire, thrown off a roof, then shot some more, then impaled on a weathervane, then stabbed in the head, then set alight, then shot a couple more times when you’re just two months’ shy of 56.”

He added: “I’m definitely not going to escape this year. Even if the orderly carelessly forgets to check my harnesses then goes off and sits in his office reading adult magazines and listening to loud music with his back to the door, as tends to happen.”